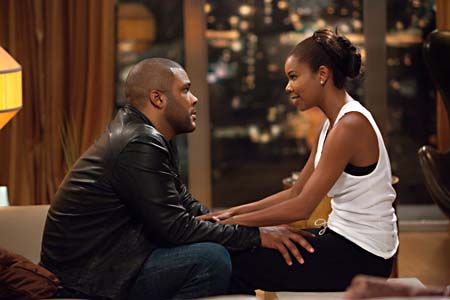 Branching out from his previous films, which feature the writer/director playing his man-in-drag alter ego, Madea, or faith-based romantic comedies and family dramas, the one-man movie conglomerate that is Tyler Perry here goes for a family and relationship drama sans holy redemption from the Good Book. Perry also plays this movie's lead character, Wesley Deeds, a son of privilege who inherited his father's successful business in San Francisco and has made the company even more successful. Except for his problem brother Walter (White), his fiancée Natalie (Union) whom he likes but is not passionate about, and his autocratic mother (Rashad), Wesley’s life appears perfect. Yet he is bothered by the thought that the life he is living is not the one he has chosen.

While going through his paces, Wesley meets Lindsey (Newton), an Iraq war widow and single mom who cleans his office. Lindsey is in dire financial straits but tries to hide it, while Wesley’s initial libidinous interest grows into something deeper as he begins to understand her situation. Mr. Deeds ultimately goes not to town or to Washington, but to a place where he can flee his sense of inauthenticity.

The melodramatic film has numerous light and comical touches, and the performances are uniformly good. The film’s pace, however, has the consistency of molasses, and there’s hardly a scene that wouldn’t be improved by judicial trimming. Dramatically, the characters’ actions are frequently unbelievable, particularly the female characters. In a couple instances, Lindsey changes her mind on a significant issue with implausible rapidity, and bride-to-be Natalie is unrealistically sanguine about the sudden changes in her life. Yet, as Wesley, Perry shows more range as an actor than any of his previous roles have allowed. Good Deeds, nevertheless, is a fairly predictable slog.