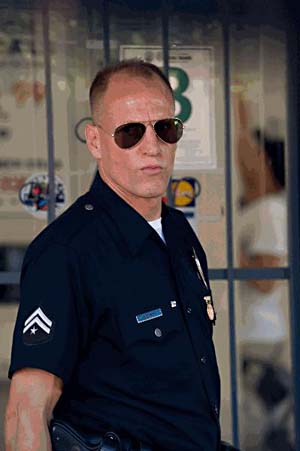 The Nineties were not a good decade for the Los Angeles Police Department in terms of its public image. The citizen video of the Rodney King beating was on repeat play as the decade began; then came the 1992 riots, and the decade closed out with the Rampart scandal, in which several dozen police officers from the Rampart division were implicated in corruption and misconduct. The movie Rampart takes its title from that scandal, even though the story’s focus is on a single individual. The implication, however, is that the corruption is endemic and immutable, something like the resigned “Forget it, Jake; it’s Chinatown” ending of another sordid L.A. saga that reminds us that there is little we puny humans can do to stem the incessant tide of venality.

Woody Harrelson is Dave Brown, a dirty cop in the Rampart division in 1999. Brown is an amoral scuzzball of the first order but has a sinewy physical and verbal charm that makes him a compelling figure, and Harrelson commands our full attention. The actor reunites with Moverman, writer/director of The Messenger, for which Harrelson received an Academy Award nomination. (Harrelson’s co-star in The Messenger, Ben Foster, also plays a supporting character in Rampart, and is almost unrecognizable in his role as a street informant.) Harrelson’s performance showcases his distinct talents for unpredictability and inscrutability. Dave is a racist and misogynist but casts those slurs aside by claiming that he hates all people equally. The character’s actions are foul, but Dave’s been on the force for 24 years, and somehow shit just doesn’t stick to him. At home, his actions face few consequences, too. He lives in adjoining houses with two women (Anne Heche and Cynthia Nixon), both sisters, each of whom he’s been involved with at some point or another. Each woman also has a daughter by Dave, and when neither wants to be his bed partner for the night, he leaves his house of women to pick up one-night stands at a local bar.

Things start to disassemble when a video camera catches Dave delivering a violent beat-down, which is constantly replayed on television. While that incident is still under investigation, Dave’s known tendency to use excessive force comes under further question when he is involved in a fatal shooting. His unconventional living arrangement at home is also crumbling. Rampart begins to wander a lot in its second half as Dave spirals wildly in an attempt to keep his life as it is. The representative from the D.A.’s office (Sigourney Weaver, deliberate and no-nonsense) suggests the unfathomable: retirement. A defense lawyer who’s as randy and perhaps as unscrupulous as Dave (Robin Wright) provides diversion. A retired cop (Ned Beatty, beefy and wily) peppers Dave with hints that he is being set up for a fall. Ice Cube plays an investigator from Internal Affairs. Steve Buscemi even pops in for a scene. Then Dave also blackmails a pharmacist for pills, so some gratuitous, druggy scenes ensue. The movie loses its narrative momentum as it progresses, and none of the events of the latter half augment our understanding of the foul character at its center.

It should come as little surprise that James Ellroy, the master of corrupt L.A. cop stories (L.A. Confidential), authored the Rampart screenplay along with director Moverman. Cinematographer Bobby Bukowski marvelously captures a sense of the sun-soaked L.A. summer, and you can practically smell the stench rising up from the grimy streets. Moverman also leaves in all the ambient sound so that the dinner-table cross talk of conversation and the mediocre performer in the bar all have equal weight with the drama at hand. Harrelson delivers some of the finest work of his career in this character portrait of an unlikable man. It’s a portrait that provides few background clues about Dave, and like the character himself, the film just doesn’t know when to stop. The Messenger
Woody Harrelson and Ben Foster play two members of the military's casualty notification team, which delivers bad news to soldiers' next of kin.