Over Your Cities Grass Will Grow

Neon-green backhoes lie dormant beside magisterial columns of dirt carved beneath a multi-acre plot of earth. Totemic lead constructions resembling battered, open manuscripts pile on top of and spill over one another. Mammoth canvases painted with molten lead and then beset with ash, acid, and H₂0 to create eerily apocalyptic images of primordial forests glimpsed through a pall of ill humor. These and much more can be viewed in all their intricate intimacies in Sophie Fiennes' elegant examination of the artwork of German painter and sculptor Anselm Kiefer.

For the past 30 years, Kiefer has been primarily working to transform an abandoned, 86-acre silk factory into his own private exhibition space/performance piece. With its claustrophobic and moribund interiors contrasting with the natural, airy, sunlit world outside (where Kiefer and a small army of assistants stoke a medieval-looking forge to create much of what lies within), this studio complex just outside of Barjac, in the south of France, is at once ominous, threatening, and elegiac. No wonder, then, that so much of the artist's prior work has touched on such transgressive subjects as the Holocaust, doomy iron ghost-boats, and dark, despairing woodlands. It is to laugh? Not even a little. But despite its overall tone of cataclysm and condemnation, Kiefer's monstrous works sing more than they shriek. This is highly personal artwork writ in a grand, towering script, and all the more intellectually and artistically legible for it.

Director Fiennes, who previously helmed the wonderfully batty The Pervert's Guide to Cinema (still our favorite DVD documentary title of all time), spends the first 20 or so minutes immersing her camera (she is credited as one of the film’s cinematographers; Remko Schnorr is listed as director of photography) within the emerging artworks. Accompanied by the clashing brasses and insistent strings of Hungarian composer György Ligeti, we are taken on a Steadicammed walking tour of the premises and its abhorrently beautifully adornments: What appear to be titanic cartographic works complete with unknown strings of alphanumerics (possibly a recursive Holocaust motif); subterranean caverns, their only natural light filtering in from small openings in crust above (so much like the mausoleum imagery in F.W. Murnau's Nosferatu); a possible hospice room filled with empty and distressed "beds" made of some unknown metal; and jaggedly nauseating piles of elephantine teeth. It's enough to give you nightmares or at least spoil your sunny day, but when Fiennes sits the artist down to be interviewed by Klaus Dermutz, all – or nothing – is revealed. "I fundamentally believe that through my work," the balding, soft-spoken Kiefer explains, "I can fill an empty room created in my childhood – a room which was devoid of things from the outside … because as a child you absorb things like a blank sheet of paper. The space has not been filled yet."

That space is crammed to bursting now, those pages overflowing with words written in a flamboyantly dystopic hand and deciphered – just enough – by Fiennes' remarkable portrait of the artist as a Jung mensch. 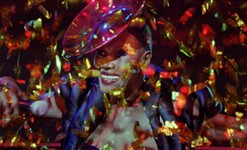 Over Your Cities Grass Will Grow, Sophie Fiennes