The directorial duo, Neveldine and Taylor, have yet to match the sheer action-splattered lunacy of their cult-classic double header, Crank and Crank: High Voltage. That has a lot to do with the fact that they've apparently never found an actor as game and/or unhinged as Jason Statham to anchor their temperamentally twisted visions, as Statham did in the Crank films. But hold on – isn't Nicolas Cage the very definition of methodical actorly insanity? This is the man who ate a live (and large) cockroach while delivering a bravura performance as a wannabe vampire suffering a total mental meltdown in 1988's Vampire's Kiss. More recently, Cage allowed his inner drug-addled psychopath a welcome outing in Werner Herzog's 2009 mind-blower Bad Lieutenant: Port of Call New Orleans. Obviously, Cage is able to access that spark of inner madness so necessary to Neveldine and Taylor's similarly warped aesthetic. Despite this, however, Cage's turns as hell's two-wheeling bounty hunter, Johnny Blaze (both here and in 2007's Ghost Rider), have been duds. Cage appears to find his role as this second-tier Marvel Comics antihero alternately silly, tremendously fun, and the means to a decent paycheck for not all that much work.

This time out, the action is in 3-D, which amounts to a few shots of flaming motorcycle parts comin' at ya, but little else. Set in Eastern Europe (gotta love those tax incentives for Yank filmmakers), Blaze is caught up in a plot revolving around a young boy (Riordan) and his mother (Placido) who are being used as soulful kindling to jump-start the apocalypse, courtesy of the devil himself (Hinds, taking Cerebus' reins from Peter Fonda). There's a sage monk (Elba) who promises Johnny freedom from his hellfire alter ego if only he'll help save the world. There are also a whole lot of not quite goofy enough gags, such as the Ghost Rider’s flaming urine (better get that looked at, Johnny!) and time squandered with his aching to be human again. Big deal. At least you can make your head burst into a flaming skull at will. I've been trying that for years and all I get are second-degree burns and a headache. 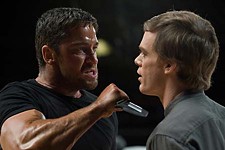