I must admit it was kinda fun watching Chris "James Tiberius Kirk" Pine pulling off some relatively nuanced riffing on his own barely solidified William Shatner-esque onscreen persona in this spy vs. spy comedy thriller. As one half – the horndog, seductively badass part, natch – of a CIA counter-something-or-other team, Pine plays his character in exactly the same way you'd expect Shatner would were he not currently age-inappropriate. Moreover, his lanky Langely partner-cum-BFF in black ops (Tom Hardy, himself late of Star Trek: Nemesis) comes off as positively Spock-like, albeit an emotionally available Mr. Spock circa the March 1967 episode "This Side of Paradise" (the one with the spores, if you recall). Alas, that running gag – and I'm not entirely sure it was even intentional – is hardly enough to float an entire film, and so what we're left with is a complete fantasy world of both spycraft and love, as well as the bond that make of us all idiots.

FDR and Tuck (Pine and Hardy, seriously) both fall for the same woman: the dipsy, ingratiating Lauren (ingratiatingly dipsitized by – who else? – Reese Witherspoon), although they're unaware that they're competing for the same babe at first. This allows the pair to command all of their spooky, dirty tricks on the other, engaging in hot-blooded war by proxy for the attentions of the interminably fickle pixie goof Lauren. Merriment of a low stripe ensues, some of which is quite a bit above par for this sort of thing, but the whole arduous ordeal of the film feels like a retread of a retread of a retread. There's a nugget of closeted gay bromance here, but it’s brushed aside almost immediately for more "wacky" set-pieces, as when Tuck, seeking to prove his übermensch cred to Lauren, goes batshit crazy during a paintball outing and practically slaughters a band of cowering, terrified tweens.

McG, who could've just as easily reverted to his birth name after Charlies's Angels: Full Throttle and thus possibly have spared us all the likes of We Are Marshall and The O.C. (for which he served as executive producer), mines shallow yuks for even shallower results here. Angela Bassett, as Tuck and FDR's boss, might as well have been walking by the soundstage on her way to the commissary given the amount of lines she has, and even Chelsea Handler, as Lauren's cynical, married-with-children-and-vodka BGF, isn't given much to do besides play another version of herself.

But Pine playing 1960s-era Shatner – sometimes subtly, sometimes not? That’s a terrific gag. Really, it is. Totally inspired. It's just not enough to save this otherwise cookie-cutter bromantic comedy from being anything other than what it is: an inoffensive yawn. 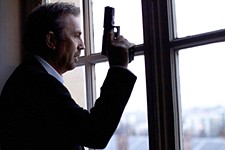 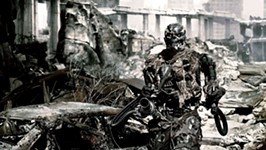