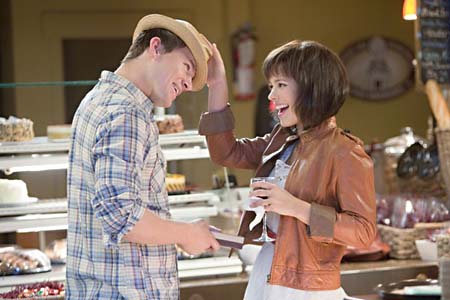 First-time feature director Michael Sucsy previously made the TV movie Grey Gardens about those fabled eccentrics, Edith Bouvier Beale and her daughter "Little Edie," whom the Maysles brothers immortalized in their 1975 documentary of the same name. Perhaps Sucsy was overwhelmed by his immersion in such colorful and outré material; he's chosen for his followup, the I Can't Believe It's Not Nicholas Sparks weepie The Vow, the cinematic equivalent of a lie-down.

Paige (McAdams) and Leo (Tatum) play a young married couple living la vida boho on the North Side of Chicago. (That's movie boho; their loft looks like it was detailed by Pottery Barn.) She's a sculptor, he's an indie studio engineer, and all is bliss until, just moments into the film, a car crash renders Paige comatose. Upon waking, she doesn't remember the last five years of her life – doesn't remember meeting or marrying Leo or the crucial reason she broke with her aloof, monied family and previous fiancé, Jeremy (Speedman), or why she left law school to pursue art. Bewildered, new Paige reverts to old Paige ways – think sweater sets, feathered bangs, and a shrill disdain for the creative class – and Leo, just as bewildered, realizes he must woo his wife anew.

Excepting its ripped-from-the-headlines premise – "Coma Survivor Wakes To No Recollection of Husband!" – The Vow is a remarkably sedate thing, an earnest and occasionally touching romantic drama that sweeps aside the devastating narrative potential of a traumatic brain injury to traffic in a more benign depiction of amnesia. Paige's rediscovery of self is too rushed and unruffled, and the filmmakers favor Leo's point of view, larding the film with a disastrous voiceover, poorly written and awkwardly executed by Tatum. The actor seems like a good sport, and there's a sweet sort of luggishness about him, but watching him wrestle with the character's complex emotions is like watching rice pudding curdle.

Every Day
Body-changing teen drama is more metaphysical than hormonal.