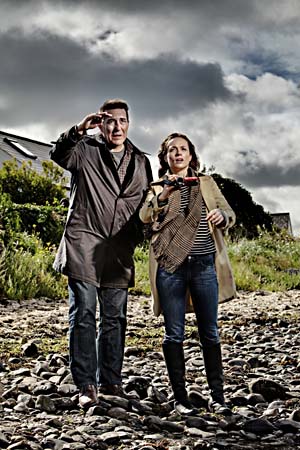 All five of the nominated live-action films embody the great promise of short filmmaking: to crystallize a story idea in a succinctly encapsulated form. That’s really all they have in common, however. The stories these films tell are vastly different, ranging from comedy to drama, from the fanciful to the issue-oriented narrative. All hail from European countries or the U.S.

"Pentecost” by Peter McDonald comes to us from the venerable tradition of naughty young film lads. In it, an Irish altar boy in 1977 chooses between propriety and his passion for soccer during an important mass. Needless to say, religion takes it on the chin during a penalty kick. This sweet film is beautifully shot, something it shares with another Irish nominee: “The Shore” by Terry George, director of Hotel Rwanda and Reservation Road. At a half hour, “The Shore” is three times the length of “Pentecost” but uses that time to reveal variable emotions and untangle personal histories. The film stars Ciarán Hinds as a man who returns to his Northern Ireland home after an absence of 25 years. He brings his grown daughter (Kerry Condon) with him, but she stumbles into a hidden mystery regarding her father’s long-severed relationships with both his fiancée and his best friend. The film mixes pathos with genuine comedy and provides fulsome glimpses of the fantastic coastline.

The German contender, “Raju,” presents the moral quandary that faces couples wanting to adopt children. Especially when traveling to foreign lands, as this film’s husband and wife do when they go to India to adopt, it is difficult to ascertain the honesty and repute of all the intervening agencies. Moreover, once a wrong has been identified, what is to become of the child who is the subject of the dispute? And also the child’s former and would-be parents?

The more comic end of the spectrum is upheld by Andrew Bowler’s “Time Freak” from America, and Hallvar Witzø’s “Tuba Atlantic” from Norway. Produced by UT grad Gigi Causey, “Time Freak” delights with its premise of an overwrought inventor of a time machine whose journey back into time only exacerbates his neuroses. Life becomes a constant do-over. It’s a clever idea, but the execution isn’t always equal to the concept. “Tuba Atlantic” is almost a magic-realist story set on the Norwegian ice. Here, a man is informed that he has six days to live, and uses quite idiosyncratic means to contact his brother in America with whom he’s had no contact in 30 years. The film reveals itself in its own way, but at 25 minutes takes a bit too much time to get there. All in all, however, this program is a strong collection of top-tier work.