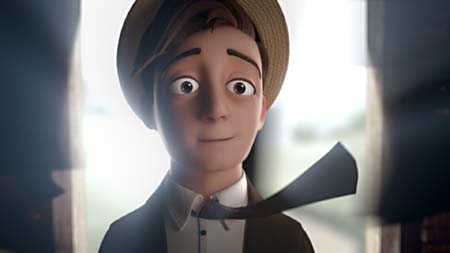 The unfortunate side effect of corralling all the Oscar-nominated shorts into one showcase is that the individual films cease to exist on their own; one tends to evaluate them not purely on their own merits but from a better-than, less-than perspective. In that case, the very best animated short of this year's nominated crop, the lively and nuanced "A Morning Stroll," isn't just winning, it's killing. Based on an apparent real-life brush with a ramblin'-minded chicken, Grant Orchard's short film frames a single encounter in three different eras. The hat-tipping politeness of the Fifties, the go-go-gadget obsessiveness of the Aughts, and the apocalyptic tenor of a frightful near-future inform and transform the same interaction, with the final vignette dynamiting into horrific, hysterically funny violence.

The kicky, kinetic "A Morning Stroll" ruined the other shorts for me. Everything else is a comedown – professionally executed, to be sure; imaginative, too; but also sunk by comparative placidness and sentimentalism. Pixar struck out this year in the Best Animated Feature category (the roundly dismissed Cars 2 didn't make the nominee list), and its Oscar entry for animated short, "La Luna" – a coming-of-age story told with arm-twisting sensitivity – doesn't inspire much enthusiasm either. Meanwhile, William Joyce and Brandon Oldenburg's "The Fantastic Flying Books of Mr. Morris Lessmore" imaginatively illustrates how literature colors the world, even if its strong retro vibe plays somewhat mustily in the wake of The Artist and Hugo. And for a film set in Louisiana just before and after Hurricane Katrina, the population depicted seems rather disproportionately white.

The somewhat-cryptic French-Canadian short "Dimanche" catalogs one little boy's Sunday – a trip to the grandparents' house, a fixation on smashing coins on nearby train tracks, and his sighing isolation, surrounded by adults – but there may or may not have also been a vegetarian agenda slipped in and possibly a suicidal bear, too? I can't be sure; "Dimanche," as with the three previously mentioned shorts, has no dialogue, and suffers the most for it. The other Canadian nominee, Amanda Forbis and Wendy Tilby's painterly "Wild Life," does include dialogue in its story of a British blue blood who moves to the Canadian frontier in 1909 and continues to loaf like he's still manor-born, impending winter be damned. The filmmakers also employ the stylistically moribund direct-camera address so popular to television sitcoms. Maybe to class up the joint, they fold in a cosmic allegory, not entirely successfully. Then again, why not reach for the stars?