One for the Money

Without a doubt, there is an audience for this film. It’s based on the first book of mystery writer Janet Evanovich’s hugely popular series starring Stephanie Plum, a New Jersey bounty hunter. But wouldn’t it make more sense on basic cable? Plum's screen incarnate (and film producer) Katherine Heigl got her start in TV, on Roswell and Grey’s Anatomy, and her public persona – a combination of prickliness and adoration-seeking that has famously grated on viewers’ and critics’ nerves alike – has historically played better there.

Perhaps, too, the fundamental incompetence – of Plum, the premise, and the film's glancing relationship to reality – might seem less grating on small-stakes TV. Writ large on the multiplex screen, Plum is an idiot – a girly girl playacting at tough broad. When she gets sacked from her job at a lingerie counter, Plum improbably becomes a bounty hunter, collaring bail-jumpers for her cousin's bond shop, despite knowing zilch about the business (how to operate a firearm, for instance, or cuff a crook without instigating a shootout). Plum has her eye on a big fish – a rogue cop wanted for first-degree murder, Joe Morelli (O'Mara). This one's personal. Plum doesn't give a lick whether Morelli is a stone-cold killer; she just wants payback for Morelli's ungallant behavior after he popped her cherry back in high school.

Bodies pile up along the way and a hooker is brutally beaten, but that's just plate garnish to the film's primary purpose, which is for Plum to heavy-breathe whenever Morelli eyes her up and down. Which raises the following question: If the filmmakers can't be bothered to believe in the real-world implications of its premise, then why ever should we? 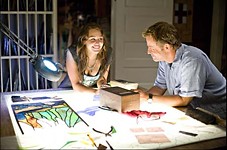 The Last Song
Miley Cyrus steps out of her Hannah Montana comfort zone to play a rebellious teen in this Nicholas Sparks melodrama.