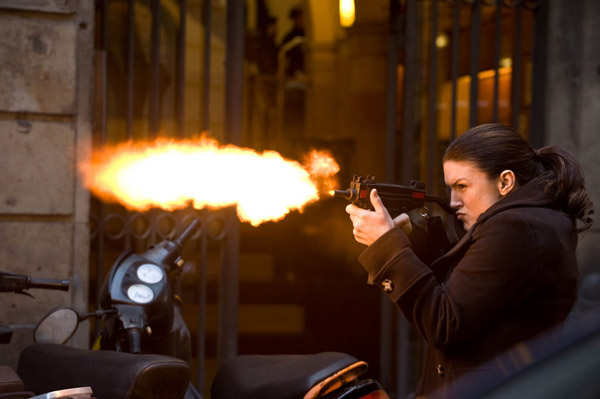 Is Steven Soderbergh still planning on quitting the movies to focus on his painting? If so, this may be your last chance to catch the director in full-blown action/thriller mode. (Although it'd be unspeakably cool to see him incorporate some fetishistic mano a mano mayhem into his upcoming Liberace biopic, like, for instance, a Bondian flamethrower/candelabra or a rhinestone-encrusted Steinway that doubles as a UFO. Just sayin'.)

Haywire is a technically exemplary but otherwise unremarkable piece of fisticuffs filmmaking keyed to Soderbergh's particularly brutal vision of onscreen physicality. And since it stars famed mixed martial artist and former American Gladiator Gina Carano as an ultrabadass femme fatale with all the right moves, it's something of an anomaly in Hollywood: a film that places an uncompromising and murderous female protagonist at the very heart of the story and then never reins her in. The same might be said regarding Zoe Saldana's turn in the recent Colombiana, but that film lacked the cohesive sparks that continually pop into being throughout Haywire. (Digressive recommendation: If you really, really want to see a female action star gone absolutely haywire, you need to check out Thai MMA wonder woman Jeeja Yanin Vismitananda in 2008's Chocolate.)

Carano is Mallory Kane, a globe-trotting government contractor (i.e. assassin) who finds herself the victim of a double- (possibly triple-) cross after a rescue mission in Barcelona goes … well, you know. Unsure who to trust, Kane wields both her omnipresent guns and her body as fluidly as any ballerina, making for some of the more interesting close-quarter combat choreography in recent memory. Alas, the film fighting may be virtuoso but the script by Lem Dobbs is weirdly unmemorable. That's a puzzler, because Dobbs previously penned one of Soderbergh's greatest films, The Limey, and there are similarities between the two films beyond all the muzzle flash. Surrounded by professional actors of the highest caliber, Carano acquits herself admirably, but the storyline eventually feels like a pretty weak excuse to hang a half-dozen action set-pieces from. For all its kiss kiss, bang bang, Haywire ends up feeling as hollow as the points on Mallory Kane's 9mm ammo.