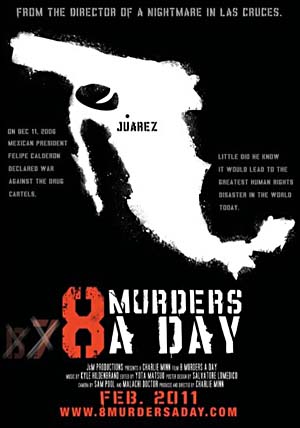 The film's title comes from the average number of homicides that result from the ongoing – and, to all appearances, unstoppable – drug-related violence just south of the U.S. border, and documentary filmmaker Minn's sense of personal outrage is well-justified. He's outraged by what he sees as the worst human-rights catastrophe in the hemisphere, but he's even more incensed by what he sees as duplicity on both sides of the border. He's right, of course. At this point, it's a mystery to no one why the warring drug cartels appear to be gaining the upper hand in Mexico, particularly in Ciudad Juárez. Corruption has gone viral throughout every capillary of the Mexican government, police, and army. From Mexican President Felipe Calderón on down to the lowest rungs of the political ladder, drug-running toEl Norte makes good business sense, just so long as you're not innocent, poor, and caught in the crossfire.

None of this is particularly fresh news, but with the situation escalating daily and Mexican elections coming up this July, Minn's document of a quickly crumbling society couldn't be more timely, which isn't to say 8 Murders a Day is as powerful as it might have been. Repeated shots of bullet-riddled corpses, grieving families, and El Paso newscasts do not so much drive home the film's core point – mainly, that it's not a drug war, it's a war on the Mexican poor – so much as they force the viewer to brace for the next round of horrific imagery. One picture of a dead child paints a thousand words, but an endless parade of ghastly images only inures one to the already overwhelming exhibition of atrocity. More fly on the wall, less fly in the ointment would have been a more subtle, sustainable tack.

That caveat aside, 8 Murders a Day is resolute in its righteous condemnation of both Calderón's misguided (or not) attempts to quell the unfolding horrors next door and the United States' equal measure of folly. Journalist Charles Bowden (Mother Jones, Harper's) offers an unstintingly grim overall picture of the shifting realms of chaos, but, distressingly, no clear way forward for either Mexico or for the U.S. 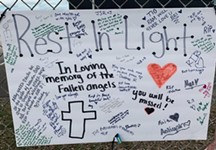 Concert Crush
Inside the Astroworld disaster 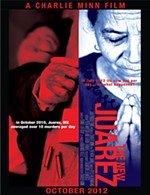 The New Juarez
This partisan film essay attacks both the United States and Mexican governments for the massive violence in Juarez.