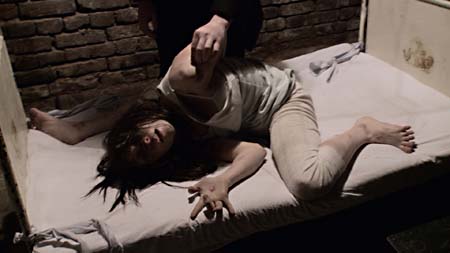 The Devil Inside offers proof, if any were needed, that demons run rampant in Hollywood, possessing otherwise intelligent and creative people to make absolutely shitty "gotcha!" mocku-monstrosities like this one. It's not just a dull, witless, horror film, it's also an incredibly lazy one, the kind that inspires proper horror film fans to gnash their teeth, rend their clothing, and throttle theatre managers not inclined to refund ticket prices.

Another faux found-footage film in the weak tradition of the Paranormal Activity juggernaut, The Devil Inside trades suburban creepiness for exorcisms gone wrong, Roman Catholic pageantry, and some extremely memorable and spine-wracking writhing courtesy of UK contortion artist Pixie Le Knot. Apart from the latter, however, this is a strictly Catholic-high-school-quality horror show.

Andrade is Isabella Rossi, a tormented wraith of a woman whose mother (Crowley) went on a murderous, decidedly anti-Catholic rampage (possibly via demonic possession) when Isabella was a child. Twenty years later, and with camera crew in tow, Isabella heads off to Italy to check in on her mother. Recruiting a pair of rogue exorcists (Quarterman and Helmuth), Isabella does everything seasoned horror fans have come to expect but with none of the panache of, say, Juliet Mills in the much loathed/loved The Exorcist knockoff Beyond the Door. Chaos and Pixie Le Knot ensue, as does one of the most wrong-headed endings in horror film history, and, God help us, a helpful postscript directing audiences to the film's website for more Luciferian unfun. Now that's just evil. The Boy
Horrors: A nanny finds that her new charge is a life-sized doll