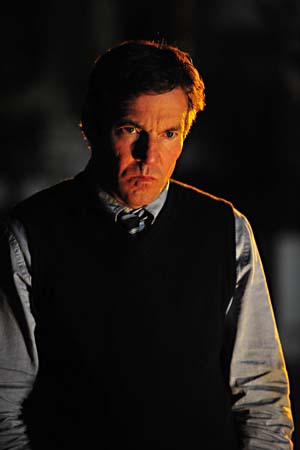 Despite its release during the dreaded post-holiday theatrical dumping grounds of January and February, this locally lensed (Smithville, Bastrop) thriller manages some wiggy, weird moments that might just haunt your dreams for days. That depends entirely, however, on how much of a Dennis Quaid fan you are. How often do we have the chance to experience the amiable Texan actor channeling not only The Texas Chain Saw Massacre's Edwin Neal but also a manic, Renfield-esque madman? Those are rare pleasures indeed, and Quaid, as Smithville town mortician Vaughn Ely, makes the most of this holiday ham with a wonderfully outrageous assortment of tics, grimaces, and outright faces of death (other people's, that is).

The rest of the film doesn't live up to Quaid's inspired and entirely appropriate Grand Guignol hamminess, and instead takes the easy out, investing its four teen leads with the task of unraveling the cause of their town's grave goings-on. Oller, likely to be voted Smithville High's Most Likely To Figure Things Out Before Anyone Else Does, is well-cast and perfectly natural as Travis, the kid with the spooky past in the small-town setting, as is Friday Night Lights alum Teegarden as Abby, his friend and confidante. Despite the intimations of the supernatural (the kids declare the mortuary "haunted" as they voyeuristically spy Ely dancing with, presumably, his dead wife), Beneath the Darkness, which also suffers from a bland, unremarkable title that makes it sound like any number of Nicole Kidman films, is less about horror than hauntings of the head and heart.

The pervading sense of loss and its accompanying guilt is underscored by an early classroom sequence in which the teacher strives, with some success, to underscore the self-inflicted madness inherent to Poe's “The Tell-Tale Heart.” Travis, it turns out, earlier lost his sister to mysterious circumstances, which only reinforces his mounting belief that Ely's up to no good. Travis is correct – the movie shows us as much in its opening moments – but when it comes to creepy old buildings, overly attentive owners, and prying outsiders, Beneath the Darkness has nada on Don Coscarelli's epic Phantasm saga or, for that matter, Norman Bates’ clear-eyed if psychotic shenanigans. It's strictly a guilty pleasure.