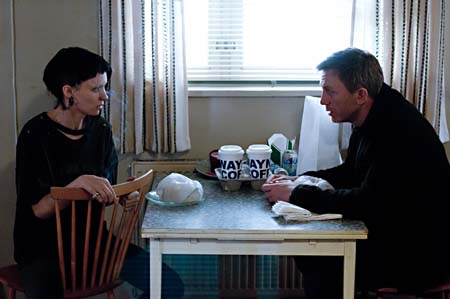 Rooney Mara nails it, completely. That was the big question/worry regarding David Fincher's (slightly) Americanized adaptation of Stieg Larsson's sensational Millennium trilogy, originally adapted for the Swedish (and international) screen in 2009. There, the role of Lisbeth Salander – punk-rock privateer, hacker-sleuth, damaged goods – was embodied, wholly, by Noomi Rapace, who threw herself into a vicious role with razor-blade panache and an unwavering commitment to the more nihilistic outliers of her character's mammoth story arc. So it should come as a relief to fans of Larsson (and Fincher) that Lisbeth's second incarnation is every bit as unnerving and hypnotic as Rapace’s. Sometimes even more so.

Mara's Lisbeth is even more enigmatic than Rapace's. Her physical presence is more diminutive and borderline elfin, yet more intense, if such a thing is possible, and her sexual interplay and blossoming relationship with Daniel Craig's unequally damaged journalist crusader Mikael Blomkvist feels more forceful. In all, it's a extremely satisfying performance in a role that's as edgy as it is nuanced.

Steven Zaillian's screenplay includes a handful of deviations from the Swedish version (among them the restoration, from Larsson's novel, of a lengthy if arguably unnecessary sequence of haute couture-clad Lisbeth shopping undercover), but the main thing that establishes this as the superior film is Fincher's exacting directorial aesthetic. Fincher has always loved playing with spatial extremes (recall the crime scenes in Se7en and the wide-open fields of that film's horrific conclusion), and here he has the bleakly beautiful Swedish countryside to play with. Investigating the decades-old murder of the favorite niece of industrialist Henrik Vanger (Plummer), Blomkvist prowls around the sprawling but claustrophobic Vanger estate – snowbound, naturally – with the occasional assist from current Vanger spokesperson Martin (an excellent Skarsgård). Bad things – and bodies – begin to pile up.

What transfixes here isn't the labyrinthine plotting – we're almost overly familiar with that by now – but Mara's Lisbeth, surely one of the most incendiary antiheroines in all of cinema. It's a knockout sucker punch of a performance, and although it doesn't completely erase the memory of Rapace (and why should it?), Mara's doomy gaze cuts through the hype and bores straight into your soul.