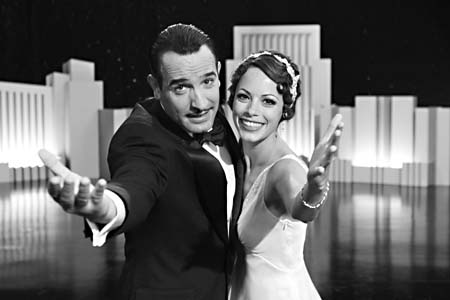 Director Michel Hazanavicius' goofy and inspired French spy satire OSS 117: Cairo, Nest of Spies appeared out of nowhere back in 2006 and has rarely strayed far from my DVD player since. Its star, Jean Dujardin, was a revelation, playing up the zany farce at the heart of that film, laughing like a maniac but wearing a tux as well as Sean Connery ever did. Certainly Dujardin, an actor so adept at intellectual, culturally specific comedy that he can express a character's inner life via absurdly graceful physical movements that are near-poetic in their exactitude, was a rare find. He's not Chaplin, but clearly this is an actor who has studied the comic icons of silent film.

As it happens, Dujardin has studied all the icons of the silents, not just the clowns – and so has Hazanavicius. This is readily apparent in The Artist, an irresistible comic gem that's as light on its feet as its protagonist. It's 1927 and silent film star George Valentin (Dujardin) is the toast of all Hollywoodland. He's a charming leading man, part Rudolph Valentino, part Douglas Fairbanks, and utterly convinced that those newfangled talking pictures are just a fad. They're not, and George's inability to rise to the challenge of speaking aloud (The Artist is silent except for a few inspired audio gags) provides much amusement and a certain bittersweet note in a film that glorifies the sheer imaginative heft of the silent era and foretells a sound-designed Hollywood only slightly less dreamy.

Hazanavicius' film riffs on A Star Is Born winningly as George meets cute with ascendant dancer Peppy Miller (Bejo, exactly as zippy and gamine as her character's name). As George's producer (hefty John Goodman in an inspired bit of casting) badgers him to speak, for the love of movies, speak, already, the silent actor and his firecracker paramour are steadily forced apart by the advent of sound. (Although it will surprise no one that this giddy bonbon ends on a decidedly high note.)

What's so intensely pleasurable about The Artist, however, is not its predetermined seriocomic trajectory but the endless parade of smartly creative and self-referential gags, which include all manner of sly, silent delights; the inevitable Jack Russell; and even an extended orchestral cue of Bernard Herrmann's, cribbed outright from Vertigo. It sounds odd, but Hazanavicius makes it fit as snugly as the snappy white formalwear gloves George slips on when out on the town. The Artist is a slight confection, really, but it's so delicious and knowing that it may well end up on any number of cineastes' desert-island lists. It's certainly on mine. 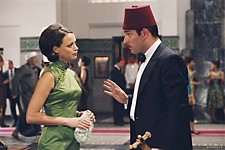 OSS 117: Cairo, Nest of Spies
This French box-office sensation is a send-up of Sixties spy films.