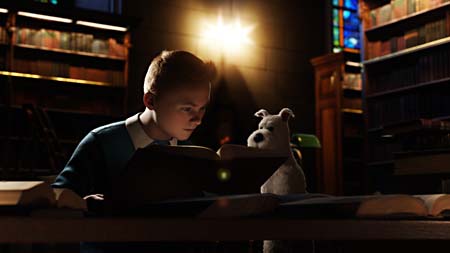 The Adventures of Tintin

I haven't played the video game Uncharted, to which this animated via motion capture adventure film is frequently being compared, but I can tell you that The Adventures of Tintin is a cracking good adventure film well worthy of classic Saturday-afternoon matinee status. It's also, in myriad ways, a more youthful version of Spielberg's Raiders of the Lost Ark, sharing as it does that film's seamless sense of full-steam-ahead storytelling and serialized derring-do. Add to that the photorealistic animation and the wickedly immersive 3-D, and you've got a huge holiday smash on your hands. What you don't have, however, is a great movie.

The Adventures of Tintin is less than the sum of its admittedly magnificent parts. Since the film is adapted from Belgian artist Hergé's long-running, French-language comic book series, the Tintin character – an intrepid young Belgian journalist with a penchant for stumbling into more mysteries than the Scooby Doo gang – is probably less known in America than in Europe (although the Internet has helped change that in recent years). That doesn't matter a jot, though, as Spielberg, working from a crackerjack script courtesy of Edgar Wright (Shaun of the Dead), Joe Cornish (Attack the Block), and Steven Moffat (Doctor Who), mines several Hergé stories to create a typically complex series of risky, slapsticky adventures for the young – and extremely white-bread – hero.

Jamie Bell voices Tintin in a generically perfect tone of gee-whiz Brit-speak as the character searches for an elusive treasure of pirate gold, among many other items of value – not least of which is the friendship of alcoholic and un-able-bodied seaman Captain Haddock (former Gollum/Kong/Caesar Andy Serkis). Frankly, Serkis' Haddock is a vastly more interesting character than the overkeen Tintin, who, despite his titular role, comes off as blandly heroic as a Eisenhower-era Boy Scout. But that's Tintin for you, and there's no changing him.

Daniel Craig voices the villainous Sakharine, a spidery creep with a personal grudge against Haddock and an eye on that aforementioned treasure. Pegg and Frost turn up as bumbling twin Scotland Yard Inspectors Thompson and Thomson, following Tintin and Captain Haddock from London to Morocco and beyond. The whole film recalls a Hope/Crosby road movie minus Hedy Lamarr that’s been filtered through the rosy lens of Spielberg cranking the action up to 11 but leaving the emotional heart somewhere back down around six.

The Adventures of Tintin is a spectacle and a half, sure, but it's not nearly as thrilling to this reviewer as were the few, precious Tintin comics of his youth. Capturing Hergé's wonderfully vivid two-dimensional comic-book panels in their essence was probably too much to hope for, but Spielberg is clearly trying to do just that. The end result is a series of endless action set-pieces that thrill but, unlike the original comic, fail to inspire.