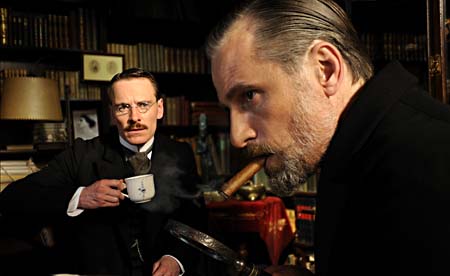 Adapted by Christopher Hampton from his own play The Talking Cure (which was itself based on John Kerr’s nonfiction work A Most Dangerous Method: The Story of Jung, Freud, and Sabina Spielrein), the film opens with a Russian emigré named Sabina (Knightley) in howling, seizuring distress, being taken against her will to a Zurich psychiatric hospital. She doesn’t know it yet, but her life will in large part be defined by her shuttling between Zurich, the home of Carl Jung (Fassbender), her doctor and eventual lover, and Vienna, the home of Sigmund Freud (Mortensen), who once thought of Jung as his “son and heir.”

Fathers and sons, both literal and figurative, are a recurring theme in Hampton’s script, but the key figure of the film turns out to be Sabina, whose yearning for sexual humiliation breaks down some of the upright Jung’s repressions. (Pre-Sabina, he has a habit of overflowing his dinner plate and oversalting his food, suggesting certain appetites not yet fulfilled.) Sabina’s influence loosens Jung from the rigors of Freud’s strictly scientific method and nudges him toward a more speculative approach – the film positions her squarely at the center of Jung and Freud’s famous break – so it seems apropos that out of a terrific ensemble (including Vincent Cassel’s mischievous turn as a hedonist doctor-turned-patient), Knightley emerges as the one you’re guaranteed to chatter about after the movie. To dramatize Sabina’s troubled state at the sanatorium, Knightley stitches together a synthesis of physical tics – trembling, bared teeth, beaten-dog shrinkings, and a clenched jaw that juts so hard one worries the actress might pop a blood vessel in her brain – and even as Sabina recovers, the ghosts of those tics remain, controlled but not entirely conquered. It’s a very particular performance, one that takes some getting used to, but I was rather taken with it. 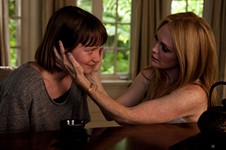 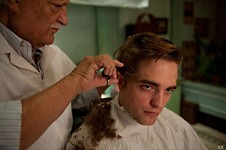