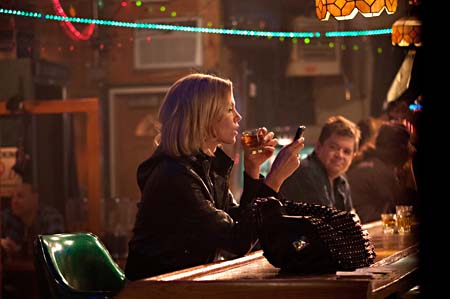 Thirty-seven-year-old Mavis Gary (Theron) is a beautiful, unhappy, and unlikable narcissist. Add delusional, rude, and alcoholic to the list. She’s not the kind of person we generally want to spend time with in the movies or in real life. However, the attributes that make Mavis bad company are the very reasons you’ll want to catch her in Young Adult: Prickliness like this in a lead character is a rare thing in a movie – especially a Hollywood comedy. Mavis’ uncommon abrasiveness and the film’s avoidance of a tidy (read: happy) resolution make Young Adult one of the freshest and most original movies around right now, though caveat emptor: This may not be enough to make it likable.

Rule-breakers Jason Reitman and Diablo Cody, director and screenwriter respectively, have teamed up again following the splash they made with Juno in 2007. Young Adult is a completely different film than Juno. It has none of Juno’s hipster patois or youthful sass and few of the implicit messages found in Reitman’s other films, Up in the Air and Thank You for Smoking. Yet Young Adult might be seen as a window into another idiosyncratic young woman’s life, set 20 years down the road from Juno. Mavis is a pseudonymous author of a young-adult book series that is about to fold. She lives in a Minneapolis high rise, having escaped her hometown of Mercury, Minn., where she was the prettiest girl in the high school but also its reigning bitch goddess. In her mind, she is a famous author in the big city whose life would be the envy of anyone from her hick town. But as we observe Mavis in her condo, the thin veneer of her self-deception begins to crack. Soon she is off on what is clearly a fool’s mission to return to Mercury and reignite things with her high school boyfriend, Buddy Slade (Wilson), who has just sent her an announcement about the arrival of his first baby.

Mavis pounces on Mercury as though she were from Mars. Her attempts to seduce Buddy flounder, though she remains oblivious; her admission to her parents that she suspects she is an alcoholic is met by a change of subject; and her callous exploitation of Matt Fruehauf (Oswalt) – who is also unable to move beyond high school, but for totally different reasons than Mavis – can be harsh to watch. Still, the film maintains a comic edge that allows us to see the humor in the various situations without ever making fun of the characters. Theron and Oswalt both deliver brilliant performances, allowing us to see past their outer appearances and into their inner depths. The film’s attention to the casual details of everyday life also allows the movie to resonate widely. Young Adult may not take things as far as one might like, but its character portraits are indelible.