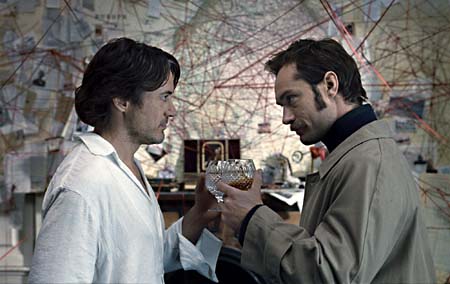 Sherlock Holmes: A Game of Shadows

Exactly like its titular consulting detective, Guy Ritchie's follow-up to his steampunky 2009 take on Arthur Conan Doyle's peerlessly curious antihero is a gorgeous shambles. The whole film, which caroms from 1891 London to Paris, Vienna, and the inevitable Reichenbach Falls of Doyle's “The Final Problem,” seems to have been subject to a strict diet of caffeine, nicotine, and coca leaves, much like Holmes (Downey Jr.). He's as jittery and manic as James Herbert's outlandishly ADHD editing, which again breaks down what's going on in Holmes’ mind's eye via staccato shots that should leave younger viewers thrilled and fans of Basil Rathbone's classic portrayal concussed and itchy.

To be honest, I fall somewhere in the middle of that group. Although the first half of A Game of Shadows is far too chaotic for its own good and riddled with a multitude of subplots (Dr. Watson is getting married! Holmes is fiddling with goats!) that at first appear to be irrelevant, the film picks up steam (literally) as Holmes and Dr. Watson (Law) home in on their quarry: the inestimable "Napoleon of Crime," Professor Moriarty (Harris, nicely subdued). Moriarty, Holmes’ equal if opposite number, is the Dr. Mabuse-like kingpin behind a series of apparently unrelated crimes involving anarchists, Gypsies, various heads of state, and enough hidden munitions to instigate a global conflagration. Indeed, that's Moriarty's scheme all along, no secret to the viewer, really, but a revelation of the utmost horror to Holmes and, particularly, Dr. Watson.

It takes forever to get to Reichenbach Falls, and getting there proves to be exactly half the fun. Along the route, Ritchie stages a triptych of stunning action sequences that are some of the finest of his career, among them an incendiary ambush on-board a steam-powered locomotive, a jaw-droppingly hyper-choreographed flight through a forest under a bombastic barrage, and a fine grand finale that cuts between the search for a faceless assassin by Watson and Gypsy beauty Simza (Rapace of the Swedish version of The Girl With the Dragon Tattoo) and the ultimate face-off between Holmes and Moriarty. The final 30 odd minutes of this revisionist Holmes explodathon are downright thrilling, and it should go without saying but we'll restate it for the record: Downey Jr. inhabits the role of Sherlock Holmes to a near-molecular level. Granted, it frequently feels as though Ritchie and his protagonist are sharing the same needle, but the end result provides a worthy rush of adrenaline.