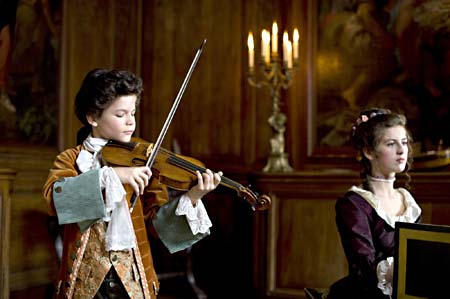 This film’s spotlight goes not to Wolfgang Amadeus Mozart, about whom much is known, but to his sister Maria Anna Walburga Ignatia Mozart, nicknamed Nannerl, who was five years his elder. Nannerl was also a musical prodigy, with a talent that, according to some accounts, rivaled her brother. The children performed together and traveled the whole of Europe with their parents, performing in royal palaces and drawing rooms. Their father Leopold was their teacher, but while Wolfgang’s education included lessons in composition, Leopold acquiesced to the propriety of the times and forbade his daughter from writing the music that ran rampant in her imagination.

Mozart’s Sister is a family affair. Marie Féret, who plays Nannerl, is the daughter of writer and director René Féret. Another daughter is also cast in a key role. René Féret’s re-creation of late 18th century Europe has a naturalistic tone, with attention paid to atmospheric details of costumes, sets, and comportment. It’s not clear, however, what it is that René Féret wants to tell us about Nannerl. The film is not a feminist treatise about a potential female artist lost the black hole of history and conventions. Nor is it a thorough reimagining of a dutiful daughter’s acceptance of patriarchal will. It doesn’t seem as though René Féret knows clearly what he wants to convey. Neither does it help that Marie Féret is not a compelling performer, though she probably lacked clear guidance as to how to portray the character. In the end, she still remains “Mozart’s sister” and not a persona unto herself.