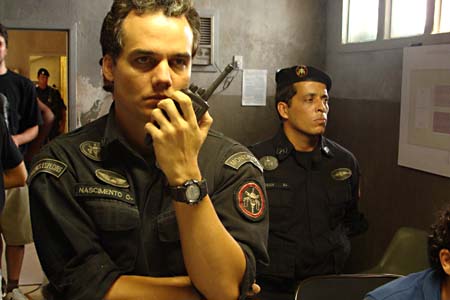 Elite Squad: The Enemy Within

Brazilian director Padilha was tapped to helm the much-anticipated RoboCop remake on the strength of this mad, muzzle-flashy burst of Rio de Janeiran ultraviolence and its commercial success. Elite Squad: The Enemy Within, which played at Fantastic Fest 2011, is a sequel to Padilha’s 2007 Elite Squad, although it's not necessary to have seen the earlier film to enjoy this snappy exploitation outburst, which remains the highest-grossing film in the history of its native country.

The dashing, very Brazilian Wagner Moura returns as Lt. Col. Roberto Nascimento of BOPE (Special Police Operations Battalion), who, as this sequel opens, bungles a prison-hostage situation and becomes embroiled in a political feud with his superiors and the media, which denounce Nascimento's prohibitively bloody strategies. Rio's perpetually endangered populace feels differently, however. They see in Nascimento a heroic figure who can stem the spillover from the violence-prone, gang-run favelas into the city proper. (Rio's economy is, after all, dependent on its tourist trade.)

Padilha choreographs his many action sequences with near-mystical precision; he outdoes John Woo in the number of rounds expended, and his knack for building suspense via nail-bitingly long takes and balletic camera flourishes is guaranteed to annoy cinematic pacifists. The fact that the film's backstory is deeply rooted in Brazilian politics – power, corruption, and lies – only adds to the dreadful tension that permeates the film. Elite Squad: The Enemy Within questions which is worse: the dirty politicians who run the city or the bloodthirsty gang members who oversee the slums? Padilha's film offers no easy answers, but the title is a tip off as to where at least his sympathies lie.