Martin Scorsese steps outside his usual comfort zone of gangsters, crime, and American pop culture to create one of his most atypical movies – an effects-heavy children’s film set in France – and winds up creating one of the most splendid and personal films of his career. A visual and technological stunner, Hugo manages to wrap an emotionally involving story about an orphaned boy in 1930s Paris around a passionate appeal for the practice of film preservation, a cause close to the director’s heart. In the process, Scorsese also schools other filmmakers and viewers in the use of 3-D as a potential enhancement to the art of storytelling rather than its contemporary bastardization as a requisite gewgaw.

Hugo (Butterfield) is a near-adolescent boy who lives alone within the inner depths of a Parisian train station amid the giant gears and mechanisms of the station’s numerous clocks, which he maintains and adjusts to run on time. Hugo was taught his mechanical skills by his father (Law), who dies before completing the repair of a sophisticated automaton he found abandoned in a museum. The boy continues to tinker with the automaton after he is relocated to the train station where his drunkard uncle (Winstone) maintains the clocks until he disappears, leaving Hugo again on his own. The boy nicks items of food from the station’s cafe and tools from the depot’s toy store. But right after the magnificent tracking shot that opens the film, Hugo is caught red-handed by the toy shop’s crusty owner, who is later revealed to be Georges Méliès (Kingsley), the forgotten inventor of special-effects filmmaking. This now-bankrupt and bitter former magician lives with his wife, Jeanne (McCrory), and their adopted daughter, Isabelle (Moretz), a girl about Hugo’s age who befriends her fellow orphan. Quite different from each other, she introduces him to her world of erudition, and Hugo introduces her to his steampunk lifestyle and the world of movies, which has been forbidden to her.

Hugo is perhaps not a story for the youngest of children as there are no talking animals or catchy melodies. But for older kids, adolescents, and grown-ups, Hugo may be the equivalent of young-adult literature that nourishes while it entertains. Robert Richardson’s cinematography is unquestionably the most impressive work seen this year, and there should be no debate about awarding him the Oscar in this category. Richardson conspires with Scorsese to swoop and track the camera, and adds dimensionality with puffs of steam and inventive re-creation of things like the fabled audience reaction to the Lumière brothers’ first film attraction, “Train Leaving the Station.” The duo even uses the tall, skinny body of Sacha Baron Cohen’s station inspector for maximum – and hilarious – 3-D effects. Scorsese’s entire crew, particularly Sandy Powell’s costumes and Dante Ferretti’s production design, functions at the top of its game in Hugo. Although a nip and a tuck here and there might improve Hugo’s overall pace, there is no denying that this love letter to the movies is something to cherish. 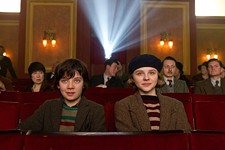 From the Vaults: John Logan
How did Johnny Depp come to be a producer of Hugo?