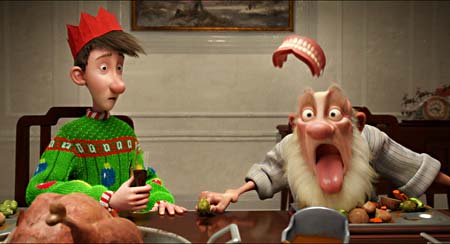 The worst thing I can say about this sweet little slice of holiday cheer is that it is preceded by evil incarnate: a Justin Bieber music video of the pint-sized castrato's soul-sucking rendition of "Santa Claus Is Coming to Town." Happily, once Bieber scuttles offscreen and the Aardman Animation titles come up, you're in good, competent, and refreshingly funny hands. Arthur Christmas is an inspired take on the hoary clichés of the Santasploitation genre. I've no doubt that somewhere there is a law on the books that requires one or more forays into Christmastime comedy chaos each and every year. Generally speaking, I'd like to find that particular book, burn it, burn Tim Allen, and then salt the ashes and plow the ground under. Every now and then, however, a holiday film full of interesting characters, newly hatched North Pole story developments, and a genuine sense of fun arrives just in time to save me from a state of yuletide, um, humbuggery. This year, Arthur Christmas is that film.

This isn't so much of a surprise, seeing as it comes from the same British animation studio that gave us the wonderfully eccentric and Wensleydale-loving Wallace & Gromit films and the much-loved Chicken Run, among many others. This time, they've left their trademark Plasticine stop-motion designs behind in favor of CGI and 3-D techniques, both of which turn out to work splendidly in the service of a very Aardman take on the notion of what it means to be Santa (voiced here by Broadbent) and the perils (and perhaps inevitability) of taking one's profession for granted, no matter how special, magical, or outrageously awesome it may be.

It's just another Christmas, however, for this soon-to-retire Santa Claus, a stressful 24 hours spent delivering the worldwide goodies via his gigantic, crimson spaceship/sleigh. Thousands of spritely, nimble elves descend from the mother ship, ninjalike and with a definite aura of Mission: Impossible meets Special Air Service-styled derring-do. Arthur Christmas (McAvoy), Santa's well-meaning if occasionally hapless son, stays at the North Pole while his brother, the ramrod-straight, perfectionistic Steve, oversees the entire operation. It goes perfectly, except for one tiny, possibly inconsequential detail: A little girl named Gwen in Croyden, England, somehow gets passed over, accidentally forgotten. When she wakes up on Christmas morning, she'll find … nothing.

Brother Steve notes that it's a one-in-two-billion mistake and is nothing to worry about; Santa Claus, exhausted, is inclined to agree. And so it falls to Arthur, accompanied by toothless, aged Grandsanta (Nighy), to right this (clearly!) terrible wrong, and in the process, prove himself to be less meek than mighty resourceful.

Longtime Aardman associate (and producer of BBC cult favorite The League of Gentlemen) Sarah Smith pulls the various threads of this wholly original – well, as original as can be reasonably expected given the thousands of cinematic iterations Christmastime has provoked over the years – together into a very coherent, visually stunning, oftentimes laugh-out-loud hilarious holiday film. If you can get past the Bieber, this is smart, funny stuff. The under-10 audience I saw it with were entranced, and, remarkably enough by itself, so were their parents. Huzzah, Aardman!