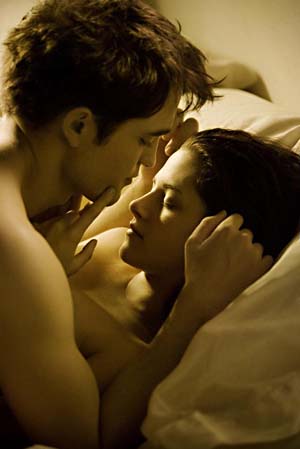 Alas, this is not that movie. Indeed, this is more or less the same movie we’ve been seeing all along: Bella wants it; Edward won’t give it up. Even after the wedding that opens this fourth adaptation of Stephenie Meyer’s Twilight books, the topic of will-they-or-won’t-they is still on the table. While on honeymoon, their first attempt results in Edward splintering the bed and accidentally roughing up Bella. (When she reassures him she’s fine and knows he didn’t mean to bruise her, it creepily whiffs of battered-wife syndrome.) So Edward swears off all carnal pleasures; wouldn’t she rather play another game of chess instead? It was about the time a teary Bella literally begged her husband to fuck her that the Twilight series officially made the transition for me from more or less harmless Victorian-minded trash to something flatly pernicious.

And boring, to boot. The filmmakers decided to break the fourth and final book of Meyer’s series into two parts, ostensibly to accommodate its surfeit of action. They must be saving all that for Part 2. Part 1 is an endless swap of dewy then sulky looks between Bella and Edward. Screenwriter Melissa Rosenberg continues her long tradition of scripting staggeringly banal, subtext-free dialogue and grasping at the profundity of her betters by quoting poetry in the prologues. (The sex-positive Edna St. Vincent Millay must be rolling over in her grave.) Bill Condon (Dreamgirls, Chicago, Gods and Monsters) takes over the directing reins for these final two parts; his most noteworthy contribution to the series so far is a terrifyingly staged birth scene that should turn the teen fan base off of sex altogether … which is precisely what this whole dumb, punishing series has been gunning for from the start.