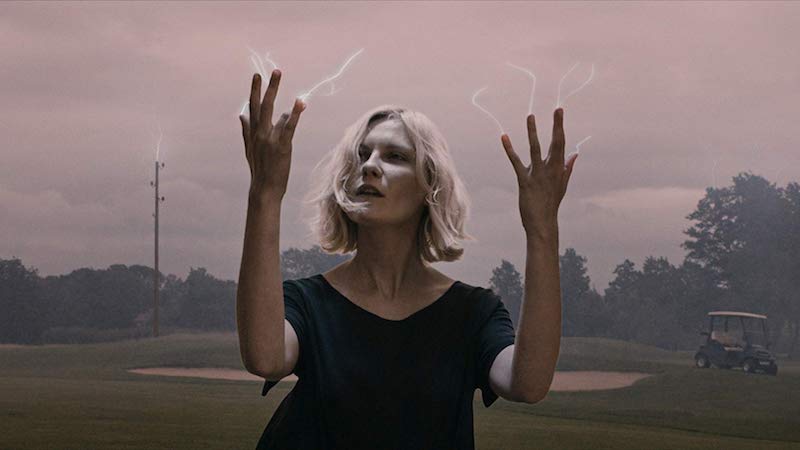 It’s the end of the world, and Lars von Trier knows it. The famously depressed Danish filmmaker, who is also the cinema’s reigning enfant terrible, brings his vision of human annihilation to the screen in this visually stunning, thematically rich, perversely humorous, and sublimely virtuosic film. Melancholia is the best film of von Trier’s storied career.

In the most generic sense, Melancholia is a disaster film (which is certainly not the same thing as saying it’s a disaster, as many of von Trier’s detractors might claim). Earth faces destruction from collision with a planet named Melancholia, which has only recently been discovered because it’s been hiding behind the sun. It’s scientifically dubious, I know, but von Trier’s ominous visual rendering of the looming wrecking ball in the sky is potent enough to allow suspension of disbelief for the next two hours. Melancholia begins with the ending, giving us further “proof,” if necessary, of the impending disaster to come. Kirsten Dunst stands alone in a field, unmoving, as birds fall down around her and the haunting music of Wagner’s Tristan und Isolde plays on the soundtrack. This tableau is followed by other dire but inscrutable images that only make complete sense in retrospect.

The first half of Melancholia is devoted to the wedding reception of Justine (Dunst) and Michael (Alexander Skarsgård) to which the couple arrives a couple hours late due to trouble with their limo. The lavish gathering is held at the castled estate of Justine’s sister Claire (Charlotte Gainsbourg) and her husband, John (Kiefer Sutherland). That these two sisters look and sound nothing alike fits with the story’s metaphor about planets colliding. Although Justine appears to be an exquisite bride with a luxurious dress and beaming smile, she suffers from a depression so overwhelming that she must occasionally slip away from her party to nap or soak in a tub or engage in spontaneous and quite public sex with a man she just met. Von Trier’s busy, handheld camera, however, has a grand time at the affair, finding humor in the various guests and their peccadillos, and calling to mind similar observations from The Celebration by his countryman Thomas Vinterberg.

The second part of Melancholia turns its focus to Claire and takes up a short time after the wedding debacle, when news reports about the impending natural disaster mount. Claire’s state of mind grows frenzied, while Justine declares placidly: “The Earth is evil. We are alone.” Underscored by the refrains from Tristan und Isolde, Melancholia also dips its toes into the waters of German Romanticism with its confluence of the rational and spiritual, the manmade world and the natural environment. In this regard, the film also seems reflective of The Tree of Life, out earlier this year.

Dunst’s performance is a thing of calm beauty and mired grit, fully deserving of the Best Actress Award she received for this work at Cannes. The entire supporting cast also proves to be a delight, even in their obstinacy and oddities. If von Trier seemed as though he was at a creative dead end by the time of his last film, Antichrist, he has reawakened, ironically, with Melancholia.