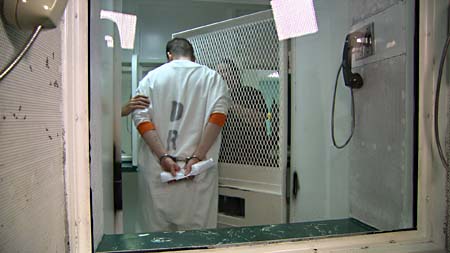 I'm not entirely sure what to make of Herzog's documentary about a 1991 triple homicide in rural Texas and its resulting repercussions, up to and including the execution of 28-year-old Michael Perry, one of two men (teenagers at the time) convicted in the homicides. Certainly, this is an indictment of capital punishment as an effective deterrent to crime, but it's also just as much an indictment of small-town idiocy and the folly of misguided youth. Conroe, Texas, comes off looking like the 10th ring of hell – a place filled with random violence, Skoal tobacco chewers, and an overall sense of intellectual and spiritual depredation. But the same could be said of any part of small-town America these days, and big-city life isn't necessarily better or less random in its treacheries.

Herzog is after much more than the obvious chain of events, however, a tack that will have zero surprise for those already familiar with the insatiably curious director's modus operandi. Utilizing police crime-scene videos and interviews with the killers, the relatives of the slain, and even the death-house chaplain, Herzog indicts poor child-rearing skills, bad educational systems, and the basest instincts of human behavior all in one brutal go.

Herzog is an eloquent interviewer/documentarian. (I'd argue only Errol Morris is his equal.) Yet his technically flawless film leaves you reeling emotionally even as you wonder why, and why now, he's turned his lens on the American way of crime and punishment. Granted, Herzog elicits some (presumably) true tales of Conroe life that are as colorful as the people who report them, chief among them that chaplain, who recounts a surreal golf-course encounter with a pair of lively squirrels and somehow ends up comparing state execution with the potential flattening of rodents. Herzog, ever the eccentric filmmaker on a mission, may have met his match in this man of the cloth.

Into the Abyss, Werner Herzog