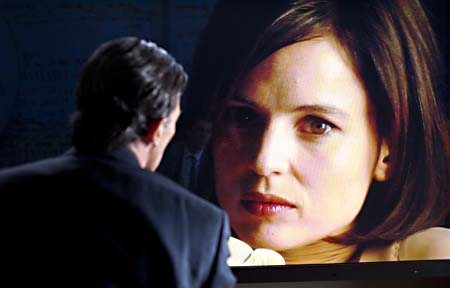 The Skin I Live In

An elaborate puzzle box of a film that continuously confounds expectations in the grandest of ways, this tricky masterpiece from Spain's maestro of madness and desire attracts and then dominates every iota of your attention from frame one. Beyond that, it's a spectacularly sensual entertainment, a meditation on the warped exigencies of obsession and revenge, and, above all, a dark and twisted tale of l'amour fou of Jenga-like narrative complexity and lush, crimson visuals. In short, it's the great Almodóvar operating at the top of his craft.

Antonio Banderas returns to the waiting arms of the director with whom he first found fame, and Almodóvar’s casting choice is a wise one. Banderas’ character here, Dr. Robert Ledgard, is a plastic surgeon of some apparent renown who long ago lost his wife in an automobile accident that ended with her being horrifically scarred in the ensuing conflagration. Dr. Ledgard, working out of his fortresslike home situated amid the verdant outskirts of Toledo, Spain, also has a live-in patient, a young woman, Vera (Anaya), who may or may not be there of her own inclination. She spends her days garbed head-to-toe in a skintight, flesh-colored body stocking, practicing yoga, perusing the works of artist Louise Bourgeois, and slowly becoming the film's main mystery. Who is she really, and why is she here? And what is her relationship to Dr. Ledgard? His longtime housekeeper (Paredes) – who also raised the future skin-grafter – isn't providing many clues. Ledgard has installed closed-circuit television cameras in Vera's private room, and, while reclining on a chaise lounge before a massive screen, he observes her with what is clearly more than clinical interest. Something very peculiar, perhaps morally reprehensible, is going on, but the exact nature of this outré situation is only revealed, cunningly and with tremendous precision, by the slow, strange turns of fate's flaming wheel. Almodóvar makes you wait for it, and the waiting makes it all worthwhile.

The Skin I Live In is an assemblage, almost an homage to any number of "overly industrious (i.e., mad) scientist" films that have come before. Cinephiles will recognize dreamy allusions, most obviously to Georges Franju's Eyes Without a Face, but there are also deep-red hints of early Dario Argento films, Robert Wiene's The Hands of Orlac and its remake, Karl Freund's Mad Love, and the films of David Cronenberg, among others.

Banderas, taking time off from voicing kids’ films and appearing in Robert Rodriguez outings, plays Ledgard with just the right amount of borderline-freaky, intensity, and Anaya is another of Almodovar's terrifically talented and shockingly beautiful female leads. Banderas’ performance is a demanding one, so rich, so complex, and eventually, so very dark that it frazzles your brain stem. Almodóvar blows his characters’ minds, and then yours, and you love him for it. Bravo!

READ MORE
More The Skin I Live In