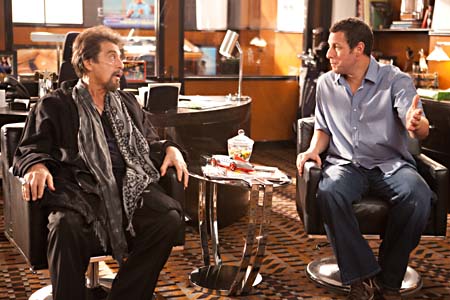 I'm not sure which is more freakish: the fact that this savagely unfun and relentlessly generic Adam Sandler comedy has spawned its own (infinitely more entertaining) Internet meme or the realization that something has gone seriously awry with the decision-making process of Al Pacino's agent. Actually, Pacino, playing a sublime but hardly subtle variation on the theme of Pacino, is the best thing about Jack and Jill, which otherwise might as well be one of Eddie Murphy's gender-bent, fat-suited, flatulent mawkathons.

It's probably worse than pointless to ask what has become of the Adam Sandler who once upon a time took a courageous chance on Punch-Drunk Love or was as consistently hilarious as he was in Happy Gilmore (the former SNL-er's last truly great comedy). Yes, Judd Apatow's Funny People had brains, heart, and a winning turn from Sandler, but the comedian quickly fell below par again with last year's snoozily predictable Grown Ups. The downhill slide is only made more comically perilous here, with Sandler (who co-wrote the cruddy screenplay with Click scribe Steve Koren) cast as Los Angeles ad executive Jack Sadelstein as well as his needy, harpy-esque twin sister, Jill, who has arrived from the Bronx to spend the Thanksgiving holiday with her brother's family and then extends her stay way past the sibling breaking point. (Holmes is utterly wasted as Jack's wife Erin.) Two Adam Sandlers for the price of one? And Al Pacino?! It's like a dream. A horrible, depressingly cookie-cutter dream conceived by a craven Hollywood exec who thinks no one will notice how similar in hysterical tone and lazy execution this is to too many previous Sandler outings (and, as noted earlier, Eddie Murphy bottom-of-the-barrel scrapers) to name. It's front-loaded with enough cameos from the likes of Regis Philbin and Drew Carey to sink most crappy comedies, and, indeed, this one finally makes it to an actual pleasure cruise, minus the pleasure.

On the other hand, however, Al Pacino could probably make a reading of the Bronx phone directory into absolutely killer stuff, and I'd probably rave about it. Smitten with Jill, he's all goosey, gravelly, lovesick puppy – a strange turn from a literal living legend, but no stranger, perhaps, than the sizable amount of money the film took in over opening weekend. Is it just me, or do I sense triplets on the horizon? 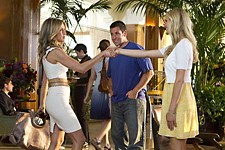 Just Go With It
Instead of seeming effortless, this Adam Sandler/Jennifer Aniston comedy has the lazy appearance of being effort-free.