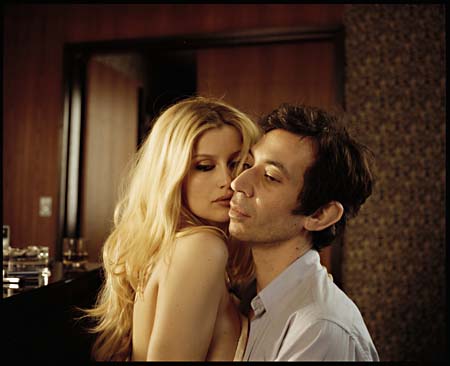 The life and times of France's other national treasure, Serge Gainsbourg, a one-man Department of Louche & Scandalous Musicality, is whimsically told here by director Sfar, who also penned the graphic novel on which A Heroic Life is based. (Edith Piaf, of course, remains the Gallic heart's first and foremost formidable singer.) Personified within a Gauloises' dog-end of perfection by Elmosnino, the film nevertheless fails to explain the exact nature of its subject's heroism. (Although, frankly, getting sloshed and lewdly propositioning Whitney Houston on live television is pretty damn near heroic in my book.)

Sfar hits all the expected high points of Gainsbourg's semisordid life. His youth in Nazi-occupied Paris offers one of the film's most memorable moments when an anti-Semitic propaganda poster comes to life and chases young Serge down the cobbles. Flash forward to the 1950s and the polymorphously perverse sensualist is trying his hand at everything from painting to lounge singing before hitting on the exactly right mélange of anti-style, wild musical talent, and timing. It's no surprise that Gainsbourg was a hit not only with the French students of the May 1968 uprising but also the Western Sixties counterculture as a whole. With his impeccably French sense of lazy yet exacting fashion, iguana-at-an-orgy eyelids, and general air of imperturbable sexuality, he was the very essence of retro-panache prior to the retro part.

Gainsbourg's infamous dalliances with Brigitte Bardot (Casta) and Jane Birkin (Gordon), among many others, give the whole film a sexy lift, but Sfar, perhaps understandably, adores the legend of Serge Gainsbourg too much to make the whole nicotine-infused picture anything greater than what it is: an excellently cast biopic about yet another self-destructive genius who burnt out but will never fade away – at least not in France, or wherever cigarettes, alcohol, and sex are still allowed.