Curtis LaForche (Shannon) stands in the wide-open expanse of his yard in Ohio, staring at the horizon, sensing that something is wrong. Storm clouds are massing in the distance, and when the rain begins to fall, it has the consistency of motor oil. It’s just one of the many troubling sensations Curtis has recently noticed: Birds sometimes flock in strange patterns, his pet dog nearly bites off his arm, ominous strangers threaten his well-being, and his living-room furniture levitates. These images seem to be the stuff of his nightmares, but that knowledge doesn’t diminish their reality or portent.

Curtis has what his friend Dewart (Whigham) describes as a “good life.” He has a good job as some kind of site foreman in a sand-mining operation; his wife, Samantha (Chastain), is beautiful and supportive; and his young daughter, Hannah (Stewart), though deaf, is developing nicely and his first-rate health insurance is going to cover most of her imminent cochlear implant. So what does Curtis have to be anxious about? Is he going crazy, or is he just tuned in to some larger apocalypse brewing? Remember, they all laughed at Noah when he started to build that ark.

Take Shelter is a deeply unsettling movie. Writer/director Jeff Nichols (an Austin resident and director of the award-winning 2007 feature Shotgun Stories) doles out information as strategically as a government official. Curtis doesn’t confide in Samantha until late in the story, although his increasingly erratic behavior becomes harder for everyone to ignore. Bit by bit, Nichols allows some details to accrue: Curtis’ mother (Kathy Baker, appearing in a single haunting scene) has been hospitalized with paranoid schizophrenia since he was 10 years old, his father died a few months back, and money is tighter than it appears to be at first glance. Does the nearby chlorine spill we hear about on the TV news in the background of a scene have anything to do with his mining work? Or Hannah’s deafness? Nevertheless, none of it seems to warrant Curtis’ compulsion to enlarge the family’s storm cellar and outfit it with gas masks and running water. What Nichols excels at in his storytelling is mixing these strange events with life’s mundanities. Normalcy and abnormality fluidly co-exist in Take Shelter, and it’s sometimes a challenge for the viewer to know which is which.

Also magnificent are the film’s visual effects, which include contributions from Colin and Greg Strause, the much-in-demand effects wizards who also chalk up producing credits on Take Shelter, as well as major input from the local postproduction house Stuck On On (see "The Post Office," Oct. 28, for more on this studio). Also on board is David Gordon Green’s regular collaborator, composer David Wingo, whose score for this movie effectively conveys Curtis’ sense of dread and growing desperation. And, of course, the megatalented Michael Shannon in the lead, is Nichols’ secret ingredient, as he was in Shotgun Stories.

The film’s epilogue is sure to be a source of contention for many viewers. It certainly is for me. While it upholds the integrity and strength of the family, it also seems to negate what has come before. Without disclosing anything, let’s just say that, for me, it is a major misstep in an otherwise beautifully modulated movie. 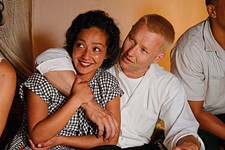