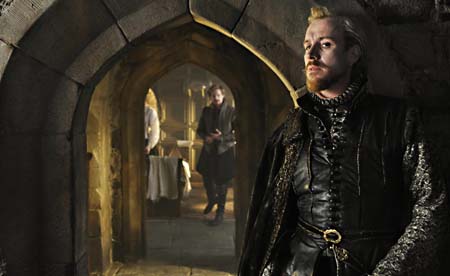 It turns out the "soul of his age," William Shakespeare, was actually a megalomaniacal drunken spendthrift, and he did not, indeed, pen even one of his iconic plays, sonnets, or poems. The truth of the matter, by way of this conspiracy-minded period potboiler, is that Edward de Vere, the 17th Earl of Oxford wrote the lot and was himself relegated to history's literary dustbin thanks in large part to the byzantine political intrigues surrounding the succession of Elizabeth by King James I, late of Scotland.

Or so it goes according to Anonymous, a messy, often goofy, and very occasionally entertaining melodrama from Roland Emmerich, who, alongside Michael Bay, may well be regarded as the soul of our explosive cinema age by fans of, well, explosions and such (Independence Day, The Day After Tomorrow, 2012). There are big bangs of all kinds throughout Emmerich's film but nothing so deftly daffy as Woody Harrelson standing astride a mountaintop as the world ends in 2012. More's the pity because, despite all the incest, dramatic thievery, flounces, ruff, and kohl, Anonymous has the tone of a Hallmark Channel holiday special gone bat-shit crazy.

Oh, it's plenty fun to see Rhys Ifans, as de Vere, pluck his chin and roll his eyes in amusement and then annoyance while the drunken, half-rate actor Shakespeare (Spall) nicks his life's work (with an unintentional assist from Armesto's playwright Ben Jonson). And, too, it's a hoot to observe the obsessive machinations of the House of Tudor and the House of Cecil (the latter realized by the shrewish Thewlis and the hunchbacked Hogg), but really, this is all much ado about Emmerich's ability to juggle multiple narrative threads without dropping too many balls. And he does it as he's done before in his disaster epics – the only difference here being the story's tangential relation to historical reality and the not uninteresting fact that Vanessa Redgrave, as the aged Elizabeth, has had her teeth properly stained for period accuracy. Shakespeare in Love it ain't, but the wealth of stage and screen talent on display, most if not all of whom have essayed one or another of the Bard's characters in the past (including a modern-day introduction by Sir Derek Jacobi), make for a pleasantly ridiculous descent into utter confabulation.