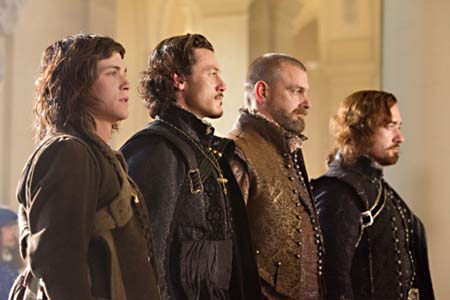 Have we retained nothing of the lessons of Hudson Hawk? Like that early Nineties comical disaster, The Three Musketeers hinges on the secret machinations of Leonardo da Vinci. It's worth pointing out that when the Musketeers – roll call: Porthos (Stevenson), Athos (Macfadyen), and Aramis (Evans) – raid Leonardo's vault for the design schematics to a flying war machine, they flood the underground lair on their way out, in the process destroying thousands of other documents. That carelessness, that churlishness, doesn't so much as raise an eyebrow; I mention it here only to highlight the rancid taste of these early scenes, which are, additionally, indiscriminately violent, flip without any commensurate wit, and a bore to behold. Still, once you accept Paul W.S. Anderson's (Resident Evil) entirely unnecessary adaptation on its own terms (nonsensical, underachieving), it has its limited charms, which include a snigger-inducing alphabet soup of accents, a standout rooftop sword fight, and British comedian James Corden as the Musketeers’ put-upon manservant.