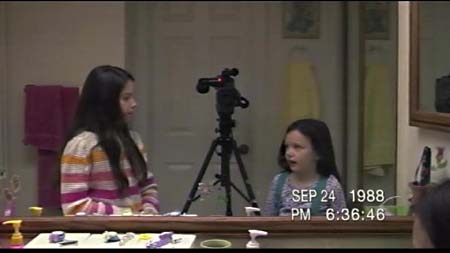 Well, I'll be damned to hell! Sometimes, just sometimes, the hype is right on the money. This third outing in the faux documentary/found footage, supernatural shocker series finally gets things right by smoothing out the previously scattershot pacing, adding a pair of cute kids (aka "demon bait") who turn out to be the tormented adults from the first two films, and leavening it all with just the right amount of humor. Is anyone really following the hellish machinations faced by sibs Katie and Kristi (Featherston and Grayden in Paranormal 1 and Paranormal 2, respectively) and their horror-prone kinfolk? No matter. This one fucking creeped me out. No mean feat, that.

Helmed by Catfish directors Joost and Schulman, Paranormal Activity 3 is still no one's idea of a classic horror film, but it delivers the gotcha moments (of which there are many more this time out) with a certain subtlety and brio when compared with its clunky, obvious predecessors. As before, the basic setup has a suburban family tormented by things that go bump in the night, invisible beings caught on blurry videotape, and an eerie finale that tends to cause audiences to shriek en masse. The suspense is ratcheted up considerably thanks to some ingenious (semi-)camerawork, most notably with the advent of a video camera mounted atop a rotating electric fan, which pans back and forth, slowly, sloooowly, until something suddenly appears frame left or frame right. It's a clever gag, and although it's used throughout the film, it's nail-bitingly effective. The plot, what there is of it, finds a cache of old VHS tapes, circa 1988, purporting to show what happened to the frightened Rey family, led by wedding videographer dad Dennis (Smith) and mom Julie (Bittner), who begin to experience odd goings-on after youngest daughter Kristi (Brown) starts chatting up her "invisible friend" Toby. Things go to hell from there, literally.

Again, Paranormal Activity 3 is more funhouse spook show than actual horror movie but, like the black magic roller coaster ride it's predicated on, it has a startling amount of jolts, frissons, and downright freak-outs to qualify as the best teen date movie of the month if not the year. Boo. Scary. 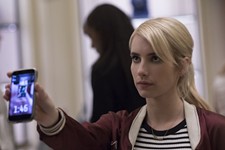 Nerve
An online game of "Truth or Dare" turns dangerous 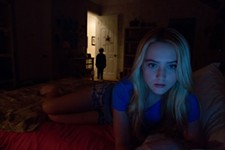 Paranormal Activity 4
Five years after the end of PA3, things are still going bump in the night.