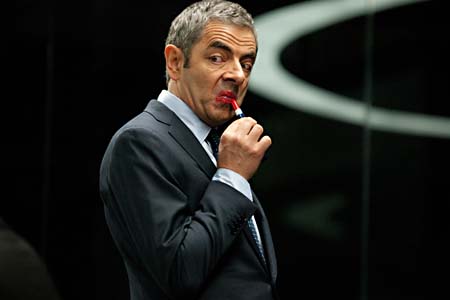 Few in North America have been clamoring for a sequel to Rowan Atkinson’s 2003 James Bond spoof Johnny English, but this is another one of those times for us to accept the fact that we are not the world. Although the original performed poorly in the states where Atkinson is best known for his Mr. Bean character, the family-friendly spy comedy racked up some serious shekels overseas, thereby ensuring Johnny English’s return, if not his rebirth. The antics of rubber-faced comedian Atkinson remain a yet-to-be-acquired taste for most Americans (myself, admittedly, included), yet those who respond to him do so with mirthful, full-throated gales of laughter, and there’s something to be said for modern comedies that don’t pander to the kind of humor that rates a hard R.

The plot of this sequel is inconsequential: Former MI7 (ha!) agent Johnny English (Atkinson) is called back into service from his exile in an Eastern monastery where he’s been studying since his unexplained debacle in Mozambique (English’s eyes flutter uncontrollably and African drums sound every time Mozambique is mentioned). Seems he’s the only agent who might be able to foil a plot against the Chinese premier. Just as 007 had to adjust to a new female chief when the franchise brought in Judi Dench, English now takes orders from Gillian Anderson’s tough-minded Pegasus, who has overseen MI7’s new corporate branding (in a clever use of product placement). English is partnered with young greenhorn Agent Tucker (Daniel Kaluuya), who, as the joke goes, is more competent than he. Also providing skillful support are Dominic West as a fellow agent and former Bond girl Rosamund Pike as the bureau’s behavioral psychologist. Although the references to various Bond movies are numerous, Johnny English may remind you more of his Gallic counterpart Inspector Clouseau.

The blundering English is designed with Atkinson’s talent for physical humor in mind. Yet Oliver Parker’s pedestrian direction does little to accentuate the humor or frame the jokes for maximum payoff (and with testicular gags being a running theme, perhaps that’s for the best). Atkinson’s fans are likely to rejoice as the comedian twists his face and body to and fro, but the rest of us will not be recruited.

READ MORE
More Oliver Parker Films
The Importance of Being Earnest
For better or worse, Oliver Parker's adaptation of Oscar Wilde's comedy of mistaken identities liberates the play from its drawing-room trappings.