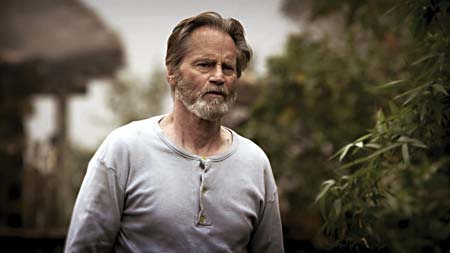 What if Butch Cassidy and the Sundance Kid hadn't died at the end of George Roy Hill's genre-redefining 1969 classic, but instead lived on – one of them, anyway – in the Bolivian backcountry? That's the intriguing and grittily realized premise of Mateo Gil's film, an elegiac take on the great American Western that sees Butch living to a ripe old age (under the alias James Blackthorn), smoking cheroots and horse-ranching his way to a potentially far more peaceful ending than the fusillade of Bolivian army lead envisioned by Hill and history.

Did I say peaceful? Set in 1927, Blackthorn begins as such, but as Cassidy/Blackthorn pens a letter to his nephew (Sundance's kid or possibly his own) it quickly becomes clear that our antihero is pining to go home. As embodied – genuinely, warmly, fiercely – by Shepard, Cassidy/Blackthorn is still as vital as ever, sharing a bed with a much younger, local love (Solier) and planning one final trip north following the death of Butch and Sundance's great love, Etta Place (McElligott). The best laid plans, however … well, you know the rest. While returning across the Bolivian desert, he's waylaid by grifter Eduardo (Noriega). The pair meet with a literal bang and eventually pair up, united, more or less, against Eduardo's tail-chasers and an equally fatigued Pinkerton detective (Rea), who's been on Butch's trail for ages. Flashbacks to an earlier, bloodier time show Butch and Sundance (Delaney) on the road to South America as Etta heads off to San Francisco carrying somebody's child. "Come with me," she says, one foot on the train and one foot on Bolivian soil. "You're not young anymore." Amen to that.

Shepard has aged himself into a grizzled and laconic icon, and his Cassidy/Blackthorn is tough as leather and still handy with a six-shooter, but bone-weary and aching to be done with this decades-long game of hide-and-seek. This is director Gil's second feature – he's best known for writing Open Your Eyes and The Sea Inside – and it's a slowly stunning piece of Western revisionism. The film has a Leone eye (courtesy of cinematographer Juan Ruiz Anchía) coupled with a drowsy, doomy pace which, emboldened by the salt-licked Bolivian settings and the finely calibrated acting from all, makes for a phantasmagoric trip down a strangely different memory lane.

Cold in July
A dream lineup is one of many treats in this East Texas neo-noir based on a Joe Lansdale book.