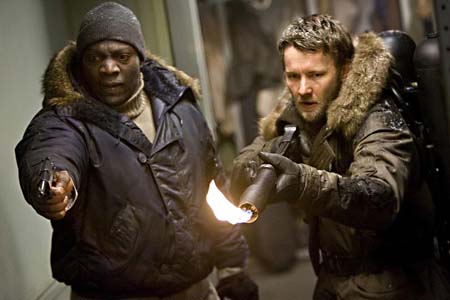 Antarctica, 1982: Thirteen men, two women, and something from another world duke it out for the right to call this world home. Sound familiar, apart from the gender ratio? Of course it does. It's not exactly a secret that this update of John Carpenter's The Thing is, in fact, not a remake at all but a prequel, showing in gooey, chitinous detail exactly what otherworldly horrors befell the doomed Norwegian scientists in the days leading up to the events depicted in Carpenter's film.

That film is, of course, a bona fide classic of the genre and extremely difficult if not downright impossible to top. To his credit, Danish director Matthijs van Heijningen, making his feature debut, doesn't attempt that perilous feat and instead relies on a finely calibrated series of good old-fashioned scares (as did Carpenter), gruesome special makeup effects (mixed in with some unobtrusive CGI), and solid performances from a cast heavily composed of his countrymen. This Thing neatly follows the template first laid down in John W. Campbell's 1938 novella Who Goes There? and Carpenter's film. The 1951 Howard Hawks/Christian Nyby version, with future Gunsmoker James Arness as a menacing bipedal vegetable, remains endearing but about as terrifying as a carrot. A scientific research team in the Antarctic, led this time out by the chilly Dr. Sander Halvorson (Ulrich Thomsen, looking and acting an awful lot like Robert Cornthwaite's character in the 1951 version) and co-manned by Yank paleontologist Dr. Kate Lloyd (Mary Elizabeth Winstead) discovers a millennia-old spacecraft buried in the ice and, nearby, its frozen pilot. The overzealous Dr. Halversen deems it safe (ha!) to bore a tissue sample from the creature, and before you can say "Holy tentacular Otter Pops!" the alien is up and about and imitating whatever host form it can find – i.e., everyone at the research station. Paranoia and freak-show creature effects ensue.

Heijningen's The Thing is tightly paced, has enough imaginative horror to satisfy even the most jaded gorehound, and never strays too far from its source, so why do you come away from it feeling like it was the runner-up in a daylight nightmare festival? Surely part of the reason is because Carpenter's original had the unflappably cool Kurt Russell as boozy flyboy and narrative center R.J. "Mac" MacReady. Winstead, who takes the lead here alongside Aussie Joel Edgerton (The Square, Animal Kingdom), just isn't as charismatic an actor as Russell. Another reason is the familiarity of the story. At the time of its release, Carpenter's The Thing bristled, literally, with the shock of the new. (To the best of our recollection, the Hawks/Nyby version wasn't even on VHS at that point.) Makeup madman Rob Bottin's insane foam-rubber and stop-motion effects work was every bit as groundbreaking and memorable as Rick Baker's Oscar-winning transformation scene in An American Werewolf in London had been one year before. Finally, we know now, more or less, how it all begins. The ability to generate real, nail-biting suspense with this story, and the thrill of it all, has dissipated tremendously in the years since Carpenter and company first blew filmgoers’ collective minds. Which isn't to say that this Thing is a bad film – it's not. But now it's less a question of "Who goes there?" than "Why go there, again?"