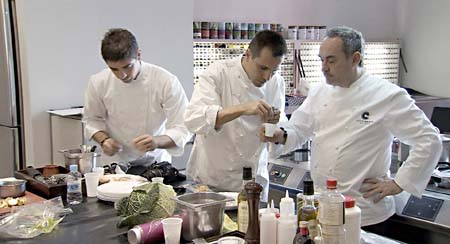 Food is love and life and one giant nomgasm in this sumptuous, succulent, overtly sensual documentary which profiles a year in the life of Ferran Adrià, renowned chef at the world's most famous restaurant, Spain's elBulli on the Catalan coast. It's a measure of how far foodies have come in the past few years that a niche doc like this is playing in theatres instead of on the Food Network. Fans of the considerably more pedestrian Julie & Julia will likely have to attach drool buckets to their chins in order to avoid hours of tedious mopping up, so lusciously bizarre are the comestibles on display here.

Yes, it looks terrific, but is it really A) delicious, B) edible, C) art? The answer appears to be a lip-smacking "¡Si!" to all three queries, although by the time elBulli serves up its ultimate 30-course meal to a mere 50 patrons, what we mostly come away with is an urge to ninja our way into the dining room by any means necessary. (We could use chocolate-covered starfish as shuriken throwing stars and demi-glaced lampreys for grapnels, maybe.)

Director Wetzel doesn't so much explain the surreal mindset of Adrià – who works with chefs Eduard Xatruch and Oriol Castro – as he does simply hang out and film the proceedings. But seriously, what revolutionary proceedings they are. It's all summed up in the film's opening shot in a darkened room of Adrià sucking on what appears to be a glow-in-the-dark lollipop. But oh, how banal a mere sugarcoated sucker would be. That's not for Adrià: His thing-on-a-stick is in reality composed of Japanese fish protein. Go figure. This is, ultimately, food preparation and presentation as razor-edge, avant-garde design, and Wetzel's cinematographer Josef Mayerhofer ogles the orgy of experimental cuisine as though it were a young Penélope Cruz and he a young Almodóvar. You get the point, yes, but sadly you'll never get in: elBulli shuttered its doors in July 2011. Still, watching what once was is toothsome torture.