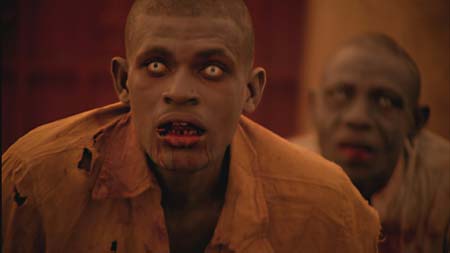 I thought I'd nearly had my fill of zombie films when, out of the blue, this undead epic from the U.K.'s Ford brothers turned up at Fantastic Fest 2010 and actually trumped genre godfather George A. Romero's latest, the meandering Survival of the Dead. Smartly employing the politically fraught and compositionally gorgeous West African locales of Ghana and Burkina Faso as sun and blood-drenched backdrops to an undead apocalypse, The Dead is a more-than-welcome addition to the ever-expanding flesh-eater oeuvre.

Downed American Air Force engineer Lt. Brian Murphy (Rob Freeman) is reminiscent of T.E. Lawrence in the film's visually arresting opening sequence. That is, until you notice that the man shuffling beside him has a monstrously misaligned right leg and a complementary compound fracture. It's one of the titular revenants, of course, and Murphy, conserving ammo, neatly sidesteps the meat-eater and troops on through the Sahara.

Shifting back several days, the lone, living Murphy finds a tentative ally in another military survivor, Sgt. Daniel Dembele (Prince David Osei). Their initial mutual suspicion of each other is set aside as circumstances – namely, the ever-present threat of undead teeth – force them to work together. Daniel is determined to make it to a rumored garrison in the north, where he believes his young son awaits, and Brian is looking for an airplane (any airplane) that can fly them out of there. In the meantime, it's tooth and nail and automatic weapons against the tottering, ghostlike African dead.

What immediately sets the Fords' film apart from the rest of the zombie-movie horde is the film's dry, dusty, often day-lit setting and the surreal, spooky images of the undead shambling across the terrain or appearing out of nowhere in the middle of the pitch-black bush. The Dead, in true Romero-esque fashion, ends on an appropriately bleak note, although one that feels somewhat rushed given the inexorable pace of what's come before. That aside, the film provides a whole new way of looking at the same old dead things. Eat up.