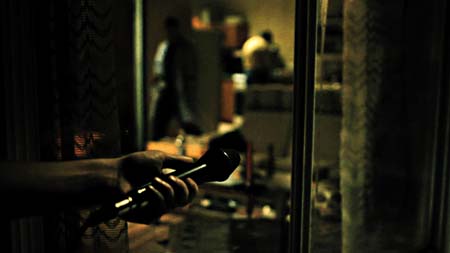 In the late Eighties, in San Francisco's Lower Haight district, two young punks transplanted from the Midwest took to surreptitiously taping their next-door neighbors, Peter and Raymond, a pair of slurry drunks who shouted invectives at each other late into the night. Peter and Raymond were an odd couple all right: The former was, crudely put, a swish and the latter, a virulent homophobe. Their diatribes – which included the oft-repeated phrase "Shut up, little man!" – become the stuff of great entertainment for their neighbors, Eddie Lee Sausage and Mitch Deprey. The young punks made dubs of their audiotapes and passed them around. A cult following was born.

Matthew Bate's documentary recounts the birth of that cult, which counts Devo and the comic-book artists Daniel Clowes and Ivan Brunetti as acolytes, and the subsequent efforts of multiple parties to monetize the Peter and Raymond phenomenon, including three competing efforts to greenlight a film and a website that hawks Peter and Raymond death certificates. There are innumerable intriguing topics the film might have explored at length – mixtape culture, the found-footage movement, the fine line between artistic expression and exploitation – but Bate elects to take a straightforward, not particular savvy line of approach.

Late in the film, the camera follows Deprey to the apartment of Peter and Raymond's old roommate, an ex-con named Tony. Deprey begs to be let in, brandishing a six-pack and a cash bribe. Tony may be an unsavory character, but he deserves a round of applause for his riposte: "I ain't selling out my life for $100." Tony nails it, but Bate's film is bizarrely, willfully uncritical of the actions of Sausage and Deprey and others.

But most damningly, Shut Up Little Man! fails to convey what was so hypnotic about the original tapes, and Bate's decision to re-enact the transcripts with actors seems weirdly contrary to the spirit of the thing. (A nine-minute segment from a 1995 episode of the radio show This American Life far better evinces the potency of the Peter and Raymond tapes – the at-arms'-length hilarity of their epic swearing and the unfathomable sadness of these broken men, both of whom died from alcoholism-related disease.) Let it be said that all viral sensations are not created equal. Bate's facile and dispiriting documentary never makes a case for why this particular slice of audio verité required resurrecting from the graveyard of pop culture arcana.