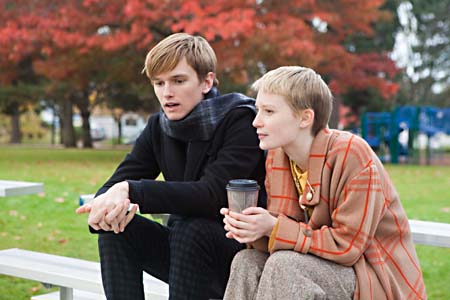 Gus Van Sant, whose sensitivity to the inner turmoils of young people has permeated so much of his work (Good Will Hunting, My Own Private Idaho, Elephant), hits a rare discordant note with Restless. This story about two death-obsessed teens is twee and precious instead of genuine and candid, and anyone who’s seen Harold and Maude will also find Restless overly familiar.

Enoch Brae (Henry Hopper, son of Dennis, in his first major role) likes to go to the funerals of strangers – enough that the habit gets him banned from many funeral parlors. When not doing that, the orphaned teen visits the graves of his dead parents or plays Battleship with his imaginary friend Hiroshi Takahashi, a deceased kamikaze pilot from World War II. Enoch meets-cute with waifish teen Annabel Cotton (Mia Wasikowska), who has a penchant for thrift-store chic and a deep intimacy with the work of Charles Darwin, observing the fine nuances and distinctions in nature. Mia also suffers from one of those only-in-the-movies brain tumors that is due to kill her within three months time. It’s clear these two were made for each other.

Fortunately, Annabel lives with her sister Elizabeth (Schuyler Fisk, daughter of Sissy Spacek), who is the only character to inject any sense of reality into this story. The teens’ conversations sound pretentious and artificial, and the whimsical touch of kamikaze magical realism just seems out of place. The actors’ performances are graceful and touching but the self-aware pomposity of the characters’ language and airs makes the whole endeavor seem affected and false. First-time screenwriter Jason Lew is out of his depth here, and Oscar and popular appeal won’t follow as it did for Van Sant when he took a chance on those other novice screenwriters, Matt Damon and Ben Affleck, with Good Will Hunting. Restless, in the long run, will be nothing but a minor curiosity in the filmographies of the otherwise talented Wasikowska, Hopper, and Van Sant.