Should What's Your Number? tank at the box office, then the people who make it their business to analyze those numbers will probably argue the poor turnout represents some kind of referendum on women in hard-R, raunchy comedies. Don't believe 'em. If What's Your Number? marks a referendum on anything, it's Anna Faris, a film comedian the media has been trying to "make happen" for ages now. Witness a 10-page feature in The New Yorker this spring, in which Tad Friend itemized Faris' appeal as "mixing a jigger of Judy Holliday, a dash of Goldie Hawn, and a pinch of Sid Vicious to brew a winsome bubblehead." So she's got a funny voice; she's habitually played dumb blond, pratfalling broads; and she's a snap with four-letter words. What didn't make it into the soup: Holliday's tart smarts, or Hawn's joie de vivre, or Vicious' daring.

Faris has had smaller turns in celebrated movies (Lost in Translation, Brokeback Mountain), starring roles in movies not many people saw (The House Bunny, Smiley Face), and top billing in a blockbuster spoof series no one went to for the acting (the Scary Movie trilogy). But What's Your Number?, which she also executive produced, ups the stakes significantly. She's in virtually every scene of the film as an unlucky-in-love thirtysomething named Ally Darling. She's fired from her marketing job within minutes of the film’s opening, although we don't know it's a marketing job until later. Come to think of it, we don't know why she was fired, either, but she doesn't seem to care much, so why should we? More salient to the film's purposes is the magic number. It's 20, in Ally's case – that's 20 sexual partners – which is the same number claimed in a Marie Claire article to doom a woman's chances of marrying successfully. So Ally resolves to revisit old lovers, figuring one of them must have matured into marriage material over the years. Problem is, there's a sexy, shirtless neighbor (played by Chris Evans) who wants very much to take Ally to 21.

There are a number of elements that go deeply wrong here. The script (by Gabrielle Allan and Jennifer Crittenden, based on Karyn Bosnak's book 20 Times a Lady) lands a laugh about once every eight minutes – not a great pace for a comedy, and the film is hapless when it comes to the crucial third-act transition from comedy to "shit just got real" drama. The soundtrack is distractingly bad – the canned crap the theatre pipes in for pre-show entertainment is better than What's Your Number?'s banal rock ballads. And the filmmakers' graceless attempts to insert more flesh into the film hits its nadir with a game of strip H-O-R-S-E, improbably set at the Boston Garden, that is frankly embarrassing to watch.

But what goes most wrong is the casting. Every facet of Faris' performance feels off.(It's hard not to look longingly at Ari Graynor, who plays Ally's sister, and wish she were starring instead.) Faris' Ally isn't fun; she's a black-out drunk. She isn't flighty; she's dim. She's isn't adorable; she's one long, over-emoting spasm of nose-scrunchings and eye-widenings. Apologists may point to the character – a hard partier on a psychotic quest – and put the blame there. Please. People acting like idiots is the warp and woof of romantic comedy. But they have to be likable idiots, empathetic idiots. Faris takes an already confused character and turns her sandpaper-abrasive. 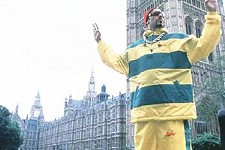