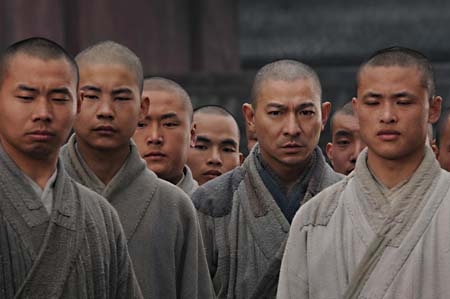 This rousing Shaolin is notable for the compassionate Buddhist philosophy that underpins what otherwise might have been just another Hong Kong period piece about power-mad Chinese warlords and their blood-spattered brinkmanship. Rest assured there's more than enough wushu wallopings on display here to satisfy even the maddest shaolin monkey. Former member of the Seven Little Fortunes, Corey Yuen (Drunken Master, The Transporter series), stages some stunningly crafted and gravity-defying fight choreography, seamlessly incorporating wirework and minimal CGI.

Set in the 1920s following the toppling of the Qing Dynasty and the opportunistic entrance of Westerners with big guns and small hearts, Shaolin portrays scheming, allied warmongers General Sung (Shi Xiaohong) and his protégé Hou Jie (Lau) as metaphors for the internal chaos of China in the throes of political and social upheaval. While the warlords feud over turf, the people survive on ever-smaller rice balls and brace for all-out famine.

Assistance of the Robin Hood variety arrives in the form of benevolent, local Shaolin monks, who do what they can until they can do no more and then begin raiding the wealthy generals’ food stores, ninja-style, distributing sacks of rice and generally embodying the Buddha's teachings in an exemplary manner. Paranoid (or more likely up to date on his Sun Tzu), Hou betrays and kills General Sung but loses everything in the process, including the love of his wife and the life of his beloved daughter.

It's no great shock that this broken warrior makes his way to the monk's temple (but not before he’s humiliated even further over the course of a comic cameo by Jackie Chan), where he becomes enlightened in the ways of compassion, sacrifice, and the myriad tehniques to kick ass using only a wooden staff and elementary physics. When Hou's younger brother-in-arms Lt. Tsao (Tse) arrives at the monastery with ill intent, Gatling guns, and cannons supplied by the Westerners, Hou's hard-won spiritual redemption shall be sorely tested. There's only so much wooden bo staffs can do against heavy ordnance, after all.

Director Benny Chan has fashioned a visually sumptuous period wushu film with a strikingly contemplative and pacifist bent. Lau, as always, is excellent as the ruined warrior-cum-monk, and the production design, courtesy of Chung Man Yee (far afield from his notoriously queasy work on Fruit Chan's "Dumplings" segment from Three … Extremes) effortlessly echoes the dual, and dueling, philosophies at the heart of the film. 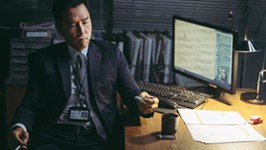