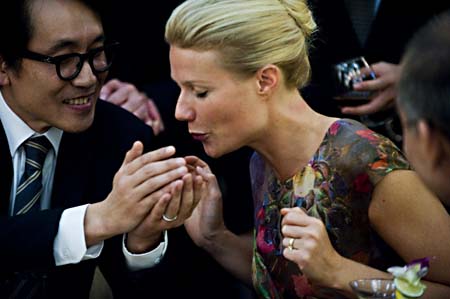 Thanks, Steven Soderbergh. As if I didn't have enough to worry about as is, now I'm freaked out about the inevitability of a mystery virus that doesn't reanimate the dead. How are we supposed to save ourselves if we can't shoot anyone in the head? What good is my Bear Grylls heavy-duty, high-carbon-steel parang in the face of a sneeze, a sniffle, a touch, a kiss? They're dead, not undead, and that's all messed up.

Riffing on one of society's most ancient existential bugaboos – plague! – with a cool, strictly by-the-book tone that's near-documentarylike in feel, Soderbergh outlines the Asian-borne emergence of a 72-hour bug that sports a mortality rate of 1 in 4. It arrives in America attached to Gwyneth Paltrow (nice work if you can get it), who returns home from a business trip to Hong Kong, runs a fever, and dies two days later, as does her 8-year-old son. Her distraught husband (Damon, solid and believable as the story's human center) is quarantined but alive, and as the scale and minute-by-minute migration of the virus becomes obvious, the Centers for Disease Control and Prevention head (Laurence Fishburne), World Health Organization representative (Marion Cotillard), and Trapper John McIntyre (Elliott Gould) work, uh, feverishly to crack the viral code. Social chaos, including looting, burning, and Internet-fed hysteria ensue.

Helping fan the flames is a conspiracy-minded blogger (Jude Law) with a readership of "12 million unique page hits a day" and a conviction that the real cure is – wait for it! – forsythia. Homeland Security appreciates neither his bloggy conviction nor his anti-authoritarian persona, and as the societal breakdown ramps up, things do not bode well for the First Amendment.

I haven't mentioned any character names, frankly, because they're irrelevant. These are strictly archetypes, although why Soderbergh, one of the most intriguing and original filmmakers cinema has yet produced, chose to make a virus the central character is peculiar casting. To be sure, Damon, Cotillard, Fishburne and the rest all turn in adequate performances, but they're so "real" as to lack any whiff of unpredictability, or for that matter, drama. Only John Hawkes, in a cameo as a CDC janitor, makes a lasting impression on the viewer. Well, that and the need for all of us to wash our hands with far greater frequency.

Contagion is certainly the most realistic portrayal of a global pandemic I've seen, but that doesn't make it the most entertaining, or even all that intellectually interesting. George A. Romero's depiction of a similar, albeit fantastical, situations in his zombie films (particularly in Night of the Living Dead and the 1978 Dawn of the Dead) strike me as far more accurate, emotionally invested, and altogether important meditations on the human condition when faced with its rapidly approaching end. Soderbergh's vision, true to life though it may be, makes for an oddly uninvolving apocalypse. A dead Gwyneth Paltrow is a dead Gwyneth Paltrow, but a dead, flesh-eating Gwyneth Paltrow, now that'll keep you up at night, lights on, heart pounding. 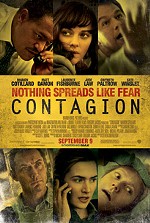 How Close to You Want to Be to 'Contagion'?
AMC Barton Creek debuts its IMAX screen