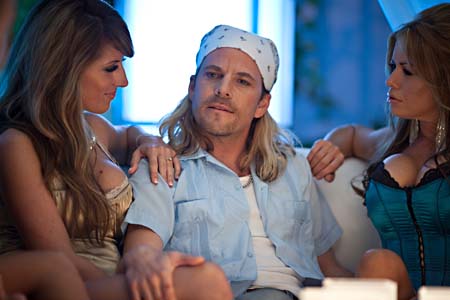 Bucky Larson: Born To Be a Star

Bucky Larson starts off with a barnyard animal sucking off a Midwestern farmer, and it goes downhill from there. Good taste was never in the cards – not in a Happy Madison comedy about a wannabe porn star – but what does startle is how tiresome it all is. Stand-up comedian Nick Swardson – best known for a recurring role on Reno 911! and more recently seen hardly making a dent in this summer's 30 Minutes or Less – co-wrote and headlines as Bucky Larson, an Iowa naif with buck teeth and a Prince Valiant haircut. Despite being utterly unschooled in sex ed, Bucky resolves to go to Hollywood to become a star in "nude movies," just like his parents did in the Seventies. The deeply uncharismatic Swardson never breaks character, and I suppose such commitment is admirable, but what a bore. The "big" twist is that when Bucky finally gets his break, turns out he has a "baby dick." It's a handy metaphor for the film at large: Nothing to see here, kids. 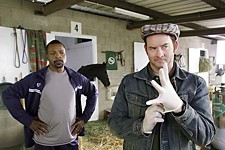 The Comebacks
A comedy spoof of inspirational sports films. 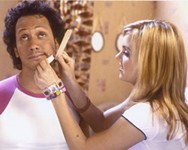 The Hot Chick
Even when decked out as an 18-year-old high school girl, Rob Schneider is just as funny as he ever was. That's good news to his ...