Opening with the oft-quoted statement “The first casualty of war is truth,” 5 Days of War should have heeded its own warning. Renny Harlin’s film about the 2008 Russian-Georgian crisis – a brutal skirmish that unfolded while the rest of the world instead tuned in to the Olympics – is a one-sided saga that seems more concerned with the mechanical and pyrotechnic details of blowing things up than with the reasons and reckonings of how these things came to pass. Another statement follows, telling us that more than 500 journalists have been killed covering wars in recent years, but neither is 5 Days of War an appraisal of the personal risks taken by war correspondents. The journalists depicted here are primarily adventure-seekers, adrenaline junkies, or troubled souls trying to heal their wounds with the desensitizing constancy of combat.

5 Days of War, which was partially funded by the Georgian government, primarily errs in its partisan depiction of Georgia as the sole victimized party in this dispute. Rupert Friend (Pride & Prejudice) plays freelance journalist Thomas Anders, who goes to Georgia after spending a year licking his wounds after the death by shrapnel of his girlfriend (Heather Graham, miscast but hastily dispatched). In Georgia with his cameraman, Sebastian Ganz (Coyle), the pair discovers Tatia (Chriqui), the survivor of a bloodbath that occurs during her sister’s wedding, who will serve as their translator and a new love interest for Anders. Chriqui, though competent and beautiful, is also miscast here. Her English has no hint of an accent (explained by her studies in the U.S.) and looks (through no fault of her own) as though she’s really in a Maybelline commercial advertising thicker, longer eyelashes that can withstand bombings and explosions.

Mostly, 5 Days of War serves as a return by Harlin (Die Hard 2, Cliffhanger) to action filmmaking. The battle sequences, indeed, look good and create commendable effects on a limited budget (although we assume much of the hardware came courtesy of the Georgian government). However, there is little rhyme or reason to the attacks, and hardly anything to help the viewer understand the specifics of what is going on. Nasty, mercenary Cossacks stomp on decent, hard-working Georgians, and the politics of the situation rarely get more complicated than that. “War,” as Dutchman (a near-camp Val Kilmer) colorfully says, “is like an old whore.” Most unforgivable, however, is the film’s coda in which real Georgian victims pose for the camera with pictures of their loved ones lost in the five days of war. Using real people to impart the emotions that the entire film was unable to evince is simply cheap exploitation. 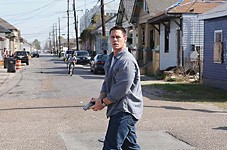