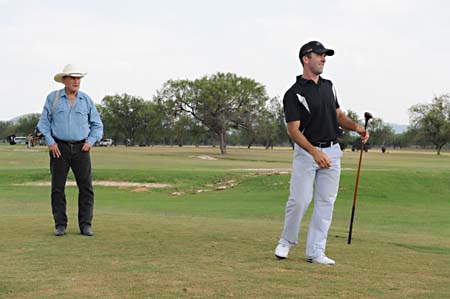 Based on psychologist/golfer David Cook's memoir, Golf's Sacred Journey: Seven Days at the Links of Utopia, this Christian-themed, inspirational foray into the sacred soul of golf and man is beautifully shot, well-acted by a cast headed by Texans Robert Duvall and Lucas Black, and about as electrifying as a Sunday afternoon La-Z-Boy golf nap. It never fails to hit a hole in one when it comes to hammering the audience over the noggin with the Ancient Mashie of Truthiness when a subtly played putt to the heart is what's called for.

Black is the San Antonio-based hothead golfer Luke Chisholm who muffs a shot or 10 on his way to the PGA and has a very public meltdown. Eighteen on a par 4 isn't the end of the world, but Luke feels otherwise, especially since his win-at-any-cost father walks off the green in a disbelieving (and decidedly uncool, parentingwise) huff. Luke packs it up and drives on down the metaphorical road only to arrive in the Texas Hill Country idyll of Utopia (and, in some sequences, Fredericksburg). There he meets grizzled Johnny Crawford (Duvall, really chewing it), an ex-PGA pro who long ago lost it to the bottle before getting religion and settling down in bucolic Utopia.

Crawford offers the young hothead a deal: Stick around for a week, and I'll save your game, kid. And that he does via a string of unconventional golf and life lessons that leave Luke a born-again ballstroker. It's meant to be transcendent: The mantra of "see it, feel it, trust it" (the "it" being God, natch) is vociferously repeated, but while I can see and feel the filmmakers’ surreptitious intent, I'm not at all sure I can trust it.

For one thing, Seven Days in Utopia feels an awful lot like Victor Salva's 2006 New Age uplifter Peaceful Warrior. That film at least had the appeal of watching Nick Nolte play Yoda, whereas here Duvall simply seems to be playing Duvall. It's as chaste as sugar-free cheesecake, which includes Luke's budding relationship with virginal town beauty Sarah (Woll, of True Blood), and it concludes with a cliffhanging, on-the-green scene that directs the audience to … a website? Now that's just evil. See it, feel it, trust it? Forget it. Your soul's better soothed by just driving out to Utopia and eating a peach.