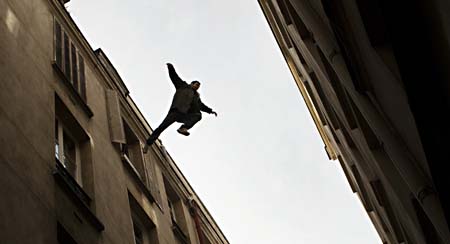 Point Blank opens at a frantic pace – unknown men running and chasing in a confined stairwell, spilling onto the street and into a tunnel; random cars and motorcycles get involved, too. Then, but for a few brief establishing scenes, the film never lets up for the next 80 minutes. Not since Run Lola Run has running for one’s life (and the life of a loved one) been so literally integral to a film’s momentum and purpose. So breathless is Point Blank that its more preposterous action moments pass by unperturbedly, as any pause to question the incidents would interrupt the pleasure of the movie’s progression.

Not to be confused with its namesake, John Boorman’s grisly metaphysical thriller from 1967 with which it bears no resemblance, Point Blank is a French action thriller about an innocent man who has no time to do anything but react to his situation – and run, defend himself, and occasionally leap from tall buildings. This is Fred Cavayé’s second feature; the first was Pour Elle, which was remade in America as The Next Three Days, starring Russell Crowe. You don’t have to look too closely to see the words “Hollywood remake” stamped all over Point Blank. I don’t know anything about Cavayé and his personal life, but if he has a wife, she should feel extremely secure: Her husband repeatedly makes movies about husbands who move heaven and earth to rescue their imperiled wives.

Gilles Lellouche is this film’s everyman hero, Samuel, a nurse’s aide who has the distinct misfortune of being in the wrong place at the wrong time. Into his ward comes the roadkill survivor of the film’s aforementioned opening sequence. He revives the patient after a fleeing visitor detaches his breathing tubes; for this he is punished by his patient’s would-be killers with a home invasion that leaves him knocked unconscious and his pregnant wife, Nadia (Anaya), abducted. Revived by a ringing cell phone, Samuel is instructed to immediately release the patient (who is now under police guard) if he wants to see his wife alive again. The adrenaline-fueled film frenzy appropriately renews with an adrenaline shot to the patient named Sartet (played with a charismatic glare by Roschdy Zem). Together, they are off and running, battering all human obstacles, and getting chased by two separate police units – one of them crooked and the other honest. The details don’t matter and although a few bits are head-scratchers, the viewer has as little time as Samuel to pause for puzzlement. Point Blank passes enjoyably, relentlessly, and determinedly to the moment of its final gasp.

All week at the Violet Crown, the French thriller, Read My Lips, will screen at noon daily on a double bill with the first showing of Point Blank.