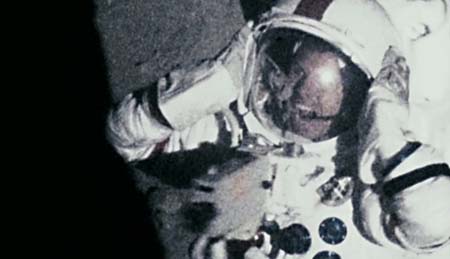 In short-handing Apollo 18, there is the obvious comparison, The Blair Witch Project; the one that film genealogists might lightly press to call a spiritual cousin, Moon; and the loonier analogue that strips out the lunar altogether, JFK. Apollo 18 suffers by comparison to all of them, lacking the newness of Blair Witch’s found-footage first-discovery; the soulful heft or big twist of Moon; or the fully formed conspiratorial relish of JFK. Even without those cinematic touchstones, Apollo 18, upon finish, feels thin.

The Weinstein Company ran a tight-lipped promotional campaign which could easily be confused for halfassed: no press screenings, unbilled actors, and a complementary website that was inaccessible throughout opening weekend, possibly from visitor overloa5d. Then again, The X Files, a more thumping foray into extraterrestrial hoo-hah, schooled us to “trust no one,” so the lack of access might very well have been another wild swing at drumming up word of mouth. (In which case: Nicely done.)

Presumably, the intent was to work in concert with Spanish director Gonzalo López-Gallego’s goal of making the film’s origins murky. In his first English-language production, López-Gallego has done an effective job of mimicking the look and sound of handheld documentation and closed-circuit footage. Even when you know you’re being manipulated, there’s no denying the itchy-making impact of camerawork that looks like it’s bypassed Hollywood manufacturing.

The premise is that the real-life canceled Apollo 18 mission to the moon actually took place in 1972 and was documented slavishly by the three-man crew and a barrage of stationary cameras. It amounts to 84 hours of raw footage, so the text preamble tells us (precisely how the entirety of that footage wound its way back to Houston is an unsolved mystery), and the film is presented as an 86-minute culling of the most salient moments – which includes an anecdote about one astronaut’s accidental jalapeño’ing of his junk, a rare morsel of character detail in a stringently plot-oriented outing. (That astronaut, by the way, is played by Lloyd Owen, cast like the others for his nondescriptness but immediately knowable to anyone who’s kept night-owl hours with PBS; he acted as a rakish laird on the Highland drama Monarch of the Glen.)

There is little to say about the film’s “baddie” – it’s actually two-pronged: The astronauts slowly, simultaneously wake to befuddling tracks on the moon’s surface and also to how alarmingly in the dark they’ve been kept by the Department of Defense, which strong-armed the mission away from NASA. The hints we get of alien life forms are ill-formed and never satisfying to a horror hound, but López-Gallego well uses the limited-by-design camera footage, most especially in strobe-light reveals. The real tension of the piece lies in the sound design, with its layering of heavy breaths, inexplicably compromised frequencies, and invasive thwackings of no known origin to the ship hull. It never amounts to all that much, but as the film unspools, minute to minute, eek to unexpected shriek, Apollo 18 is an intriguing, if never enthralling, fusion of period space-flight procedural, conspiracy theory, and monster movie. Miss Potter
This Renée Zelweger movie about the life of Peter Rabbit author Beatrix Potter lacks dramatic tension and a sense of purpose.