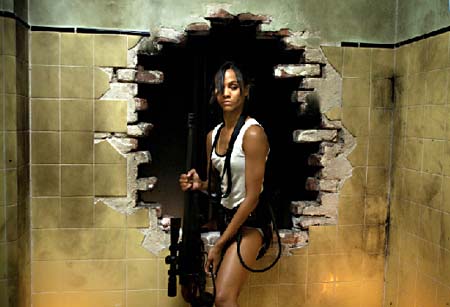 I have difficulty believing that "Megaton" is director Olivier's actual last name. A disciple of Luc Besson (who co-wrote the script with Robert Mark Kamen), Megaton simply does not live up to the Hiroshima-leveling explosivity of his surname. Colombiana is one long megayawn; I'd have garnered more titillating thrills rewatching freckle-faced Russkie sexbomb Natalya Rudakova strut her leggy, sassy stuff in Megaton and Besson's Transporter 3.

As it is, Zoe Saldana (Lt. Uhura from the 2009 Star Trek reboot) – Colombiana's assassin, Cataleya, who’s hunting her family's killers – is easy enough on the eyes. What's missing from this film is any sense of import. And suspense. And originality. And anything remotely resembling the action masterpiece that Besson, in his younger days, was known for. Remember La Femme Nikita? The last Besson film of any note to play in Austin was the gloriously unhinged District 13: Ultimatum, which wasn't even directed by Besson (though he wrote it).

Colombiana's meandering story kicks off as the waifish Cataleya (played as a child by Stenberg) witnesses the murders of her parents. They're somehow involved in the Colombian drug trade, although that's never explained to anyone's satisfaction, like most everything else in this film. Fifteen years later, that Cat has relocated to Chicago and grown 9mm claws and a fetching penchant for black-on-black bodysuits. With the aid of her uncle Emilio (Curtis), she terminates 22 of the men involved in her family's demise before attracting the attention of Chicago Police Department Detective Ross (James). Few of the 22 kills are shown onscreen (why bother?) before the long but dumb arm of the law finally notices that this killer signs her bloody work with a lipstick-scrawled orchid: the Cattleya orchid, to be specific.

Colombiana, despite its many explosions and some howlingly wooden dialogue, is an eminently forgettable actioner. Unlike Megaton's previous film, the aforementioned Transporter 3, it lacks any sense of self-deprecating humor and Jason Statham, two huge setbacks for any internationally produced shoot-’em-up these days. Perhaps Besson will grow weary of helming the Arthur and the Invisibles franchise and grace us with Transporter 4: The Stathaming some day soon. Until then, it's strictly ennui time at Chez Besson. 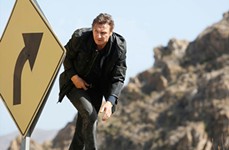 Taken 2
The action in this Liam Neeson thriller is frenetic and frequent, and keeps him in constant MacGyver mode.