Elements of a cop story, a fish-out-of-water tale, a mismatched-partners comedy, and a daffy Irish yarn all combine in The Guard to create a delightful film that’s capped with fabulous performances by Brendan Gleeson and Don Cheadle. This first-time feature by writer/director John Michael McDonagh also earns good marks for its colorful, witty, and profane dialogue. It’s no surprise that The Guard’s closest point of reference may be the film In Bruges, which paired Gleeson with Colin Farrell as a couple of hitmen and was written and directed by playwright Martin McDonagh, John Michael’s brother and an executive producer on The Guard. Both McDonaghs have a striking command of Irish and American film idioms and share an ability to bend the specifics of genre toward unorthodox and often very humorous purposes. Gleeson, always one of the stealth ingredients of any film in which he appears (Michael Collins, Braveheart, and a couple of Harry Potter films), here basks in the spotlight as an unconventional leading man. As Sgt. Gerry Boyle, a provincial police officer in Cannemara, a village on the western coast of Ireland, he initially appears to inhabit every cliché about fat Irish cops of questionable morals. In the film’s opening sequence, Boyle is seen lifting some blotter acid from the stash of a car-crash victim and dissolving a tab of the LSD on his tongue while still in uniform. His foil appears in the guise of FBI agent Wendell Everett (Cheadle), the company-man antithesis of Boyle, whom someone refers to as the "last of the independents." Most of Boyle’s Irish colleagues marginalize him because of his oddities, but Everett finds something curious and potentially brilliant about the man. Sent to Ireland from the U.S. on the trail of a shipment of $500 million worth of cocaine (or half-a-billion-dollars-worth, in the aggrandizing words of the Connemara police chief), Everett quickly learns that he will glean nothing from the aloof Irish villagers without an inside ally. Despite Boyle’s racist barbs designed to test Everett’s mettle, the FBI agent quickly realizes that Boyle possesses more mental dexterity than most of the department combined. Still, Everett’s exclamation after Boyle tells him he recently visited Disney World by himself hangs over the film: “I can’t tell if you’re really motherfucking dumb or motherfucking smart.” Then there are the drug-runners, who could have stepped out of a Tarantino film with their discussions of favorite philosophers and informed appraisals of Bertrand Russell and musician Chet Baker. The criminals are, for the most part, caricatures, and the details of the cops-and-smugglers plot tends to take a backseat to the film’s character study. But what a study it is. Gleeson is triumphant in this portrait of a complex man who is concurrently sensitive, boorish, brilliant, singular, and unforgettable. 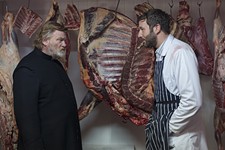 Calvary
Brendan Gleeson stars in this darkly hilarious and deeply ruminative update on the passion play.